John’s mother was concerned when her son started losing hair, long before Propecia was known to cause permanent sexual dysfunction issues. “She believed that being bald wouldn’t help my career or my love life so I listened to Mom and took this hair-loss medication for more than a decade,” says John. 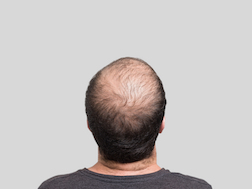 “My father was bald and my hair started thinning when I was 22 years old so my mother figured I would become bald,” says John (not his real name). “Mom saw a commercial on TV about Propecia and we found a dermatologist who prescribed it. Of course if we had known about Propecia side effects I would have chosen to be bald.”

John is now 36 years old. He and his wife are planning on having a family, but they’ve been trying since getting married three years ago. “Now we are concerned they she hasn’t gotten pregnant so I am in the process of having my sperm count checked,” John explains. “Of course there’s a possibility that not being able to conceive could be an issue with my wife so she is also getting tested.”

But Propecia worked to treat hair loss. John no longer worried about his hair thinning, and pretty soon he was getting “normal” haircuts like he did as a teenager. “But there wasn’t any hair on my chest or anywhere else on my body - just the top of my head,” he explains. “I started to get worried when my voice became a bit higher-pitched, not long after I started taking the drug. On the phone some people actually thought I was a woman and my friends were teasing me. Many years later I found out that this can happen when you mess with testosterone.”

John stopped taking Propecia after reading online about its association with low sperm count and sexual dysfunction. “Fortunately I have no issues in that department, so far. I brought up the sperm count issue and Propecia with my GP but he hasn’t heard of any problems,” adds John. “I had a blood test to check my testosterone levels and it came back on the low side. Normal levels are anywhere from 200 to 900 and mine clocks in at 250, so it’s not alarming but concerning.

“And my other issue is mood swings. I haven’t taken drugs to help with my anger issue because I don’t like the idea of taking drugs, but it is threatening my marriage - I often lose my temper and this isn’t like me.” Anger is a common response when discovering that Propecia can cause permanent side effects. “I was also surprised that Merck, the drug manufacturer, hasn’t taken Propecia off the market. And my mother, who only wanted the best for my well-being and talked me into taking Propecia, is very worried.”

More PROPECIA News
Since I quit Propecia I am getting more hair on my body. It’s like I am going through puberty at age 36. I now have chest hair, and some hair on my back, but the hair on my head is growing slowly, so maybe I’ll end up bald after all.”

John recently found out about Propecia lawsuits and so many men having similar issues, i.e., low testosterone. Next up, he is getting prescription records from Walmart but they can only go back to 2003. “I want to have a paper trail from my pharmacy, my dermatologist and my GP, should anything happen with my Propecia claim,” he says. John had another testosterone test a few weeks ago and plans on discussing the results with his doctor.

“My wife is very concerned. She said I was crazy to take Propecia in the first place,” John quips. “I asked her not to think badly about my mom. And my wife says she would love me even if I was bald. I never should have taken this drug in the first place.”

Posted by
stanford rose
on September 16, 2016
About a year ago I took Propeia for about two months and began to experience a dramatic drop in libido, depression, then bouts of acid re flux, colitis and itching on my neck and back. Right now those symptoms have passed, but my testosterone is 175 and free testosterone is 1.5 and there are days of extreme fatigue that make it difficult to get through the day. I'm eating well, taking health supplements and exercise as much as I can and seem to be very slowly recovering. But it's been Hell.