Anyone considering taking Propecia should be informed that the sexual side effects are often long term - possibly permanent. And anyone prescribing the hair loss drug should know by now that Propecia sexual dysfunction is not a rare side effect. 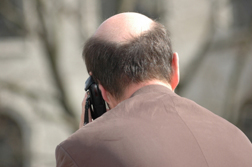 If Dave (not his real name) was told that Propecia would put him at risk in any way, he would have taken his wife over vanity. Instead, Dave is getting divorced from his bride of of just six months. “I don't blame her. She deserves a happy and sexually fulfilling life and that won’t happen with me,” he says. Although Dave jokingly refers to himself as a zombie due to Propecia, he is far from joking about its long-term side effects.

Dave isn’t alone. This reporter has spoken with several Propecia victims who are suffering with Propecia impotence and other serious complications. Most men took the medication for hair loss; others were prescribed finasteride to treat benign prostate enlargement (BPH). In fact, a recent study published in Endocrine Reviews and Metabolic Disorders (August 2015) by researchers at Boston University School of Medicine reported that 25 percent of men currently taking Propecia for the treatment of BPH appear not to benefit from taking these medications! Commenting on the study, The Post-Finasteride Syndrome Foundation said that “Those prescribed Propecia...for male pattern hair loss are also at risk for adverse events elicited by these drugs.”

Dave quit taking the hair loss medication earlier this year, hoping that the Propecia sexual dysfunction side effects were short term, but it’s been downhill ever since. As well as facing divorce, Dave almost lost his job. He is suffering from depression and anxiety and financial troubles. “I’m sick to my stomach with worry. I’m not performing well at work and I’m sure I won’t be employed here much longer,” he adds.

Here is Dave's story, in his words.

“About six years ago coworkers and my girlfriend at the time noticed my hair was thinning - it made me feel insecure and less confident. I started looking at hair restoration and found a place in Dallas that was offering a new procedure called neograft. I was young and successful and could afford the procedure. Afterward I received a prescription for Propecia, but I was hesitant because I never take medications. However, the thought of losing my hair won over any hesitation.

“After taking Propecia I began a spiral into sickness, depression, anxiety, suicidal ideation and alcoholism. I was prescribed lexapro, celexa, cymbalta, and lorezapam over the course of the past six years; I am still on cymbalta and lorezapam. I’ve spent thousands of dollars trying to understand what is wrong with me and why I’m suffering like this. I had my first panic attack after moving to Kansas City for a job promotion - I just wanted to give up everything. After the panic attack I sought treatment again and was put back on antidepressants. That was in January 2012. Fast-forward to January 2015 when I stumbled upon Post Finasteride Syndrome and it all made sense! Everything I was experiencing was related to Propecia. I’m not sexually active anymore as I’m not able to maintain an erection throughout intercourse. I should’ve known better when I first took Propecia and had pain in my testicles. I should have known Propecia’s promise [to restore hair] was too good to be true...

More PROPECIA News
“Something must be done to find a cure for all of us suffering, and compensation must happen. Merck has robbed me and so many others of our humanity. Zombies don’t exist but Propecia victims are the next closest thing. I’m unable to feel emotions like I once did and incapable of the simplest human function known to man, reproduction.”

Yours Truly,
Zombie in Missouri

Dave adds that he tried to participate in the Propecia Baylor Studies but panicked before the test because it would involve an incision in his penis. He filed a claim with LawyersandSettlements hoping that he might be able to represent other men who have suffered but are too embarrassed to come forward. If you or someone you know has a story like Dave’s, a Propecia attorney might be able to help.

Posted by
Devan zappia
on October 4, 2015
I had alot of the same reactions as "dave". It has left me sexualy damaged, and I am only 26!