PPH and Fen-Phen: One Plaintiff's Lawsuit

"I found an attorney to help obtain my medical record that shows I was diagnosed with PPH [Primary Pulmonary Hypertension or Pulmonary Arterial Hypertension (PAH)]," says Carolyn, "and he filed a lawsuit on my behalf against American Home Products Corporation, the makers of fen-phen."

"Right now the lawsuit is a civil case and was filed Orange County, California in March, 2008," Carolyn says. "My lawyer wants the doctor who prescribed the diet drug combination to testify—that is the next step." That might be easier asked than done. "We called him the fat doctor and he was rather old when I saw him back in the '90s. I went back to the diet center but he is no longer there, so my lawyer will track him down. Funny, now it is called the Diet Wellness Center. 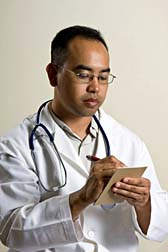 "A summons will try to be served to the doctor and the drug company. But the suit is really against the drug company so I'm just waiting," she says. Carolyn first joined a class action lawsuit, "but it was taking a long time, so my lawyer and I decided to go this route—I am the plaintiff alone," she says.

When Carolyn first thought about joining the class action back in the late 90s, she had an echo-cardiogram and was diagnosed with mitral valve regurgitation. In the past decade or so, her symptoms changed and she has been "upgraded" to PPH. At that time, Carolyn worked in a small office that didn't offer medical insurance. "Individual coverage is so expensive—it cost me about $170 per month so it took a long time until I could afford to see a cardiologist," she says.

Carolyn hopes the lawsuit will at least cover her medical expenses and possibly her medical insurance because her future is not rosy. "I'm still at work because I have a sedentary job but it gets more difficult daily to just get out of the house and I haven't even begun to discuss treatment plans yet."

When reports showed it caused heart damage, the drug fenfluramine, (one half of the fen-phen combination), was voluntarily pulled from the market in September 1997. Even though a small number of cases were reported at the time, doctors took years to figure out who is at risk. As well, PPH (also known as PAH) can take years to develop; many victims who took the diet drug in the 90s are just now finding out that they have serious heart valve problems.

Fen-phen was a wildly popular diet drug in the 90s, even though the Food and Drug Administration never approved the drug combination. Doctors wrote an estimated 25 million prescriptions for fen-phen. It is not yet known how many of those users have developed PPH.