Mary G. wasn't involved in the class action lawsuit against Fen-phen several years ago. Although she was diagnosed with a leaky valve, her condition wasn't serious enough to qualify. Now Mary is worried that she might soon develop Primary Pulmonary Hypertension (PPH/PAH) and wonders if she has any legal recourse.

"It all began with the Fen-phen diet that I took for about two or three years," says Mary. " I didn't receive a settlement because when the lawsuit began, the plaintiff lawyers had people traveling around the country doing echocardiograms. I went to Springfield, a three hour drive from my town, to have the test. I was told there was such a minute amount of damage that I wouldn't qualify." 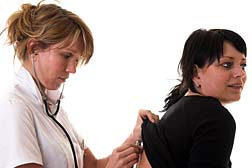 But a few years ago, Mary started to have breathing problems. She also experienced severe heart palpitations and chest pains—she believes the valve leakage is getting worse and may lead to PPH/PAH.

"It got so bad that I wound up in ER and that is when I got another echocardiogram," she says. "The palpitations would be ok for an hour and start again. I had a stress test and my blood pressure shot up so much that I thought I was going to pass out." (During a stress test, an echocardiogram is done both before and after your heart is stressed either by having you exercise or by injecting a medicine that makes your heart beat harder and faster. A stress echocardiogram is usually done to find out if you might have decreased blood flow to your heart.)

"I was told to get another test in a year," Mary says. "Why tell me to come back in a year unless they are concerned? I didn't think much about my diagnosis until it occurred to me that fen-phen is responsible for PPH. This could be gradual so now I am wondering why I'm not included in a lawsuit when some people got a settlement years ago?

"When the class action lawsuit was settled, I was OK but a leaky valve seems to be developing at a different pace with different people. Why did I even develop a leaky valve right out of the blue? I have no other problems and there is no heart disease in my family. It is too coincidental. I have four brothers—they have no heart problems and I was the only one in our family to take Fen-phen.

The thought of developing PPH is constantly on my mind and I won't know anything further for another nine months. I was just sent a report that confirmed the leaky valve and so far, I haven't had the opportunity to discuss this with my cardiologist. Obviously I will talk to him if and when I need to.

I think people who opted out of the first settlement were smart—maybe they thought they were going to get sicker. From my understanding, that gives them the chance to sue for a greater amount. I hope somebody is going to help me now that it is getting worse, and this scares me."

PPH is now known as pulmonary arterial hypertension (PAH). It is a rare lung disorder in which the blood pressure in the pulmonary artery rises far above normal levels for no apparent reason.

More News
The trouble with diagnosing the disease is because it is rarely found in a routine medical examination. Even in its later stages, the signs of the disease can be confused with other conditions affecting the heart and lungs. More often than not, symptoms of PAH appear and a diagnosis is not made until much later. Studies have shown that patients often develop PPH/PAH several years after having stopped taking diet drugs such as Fen-phen and Redux.

Testing for PPH includes an electrocardiogram; echocardiogram (that Mary had); chest x-rays and finally, cardiac catheterization, the latter being the "gold standard" for a PAH/PPH diagnosis.

Can Mary now get involved in a lawsuit against the diet drug companies? Next week, LawyersandSettlements will talk to PAH/PPH lawyer Nick Johnson who will answer this question and more.