Walter started taking fen-phen in 1995, but six months later he noticed a shortness of breath. Only this year his pulmonary doctor diagnosed PPH Primary pulmonary hypertension. "When the doctor found out Walter took fen-phen, he immediately said that was the cause," says wife Susie. "We thought we were hearing a death sentence."

"When Walter complained about his breathing problems, his prescribing doctor told him to discontinue taking fen-phen," says Susie. "From then on, his general health slowly declined. It got so bad that Walter was unable to walk from the car to the house without stopping to rest twice, to regain his breath and allow the lower chest pain to ease." 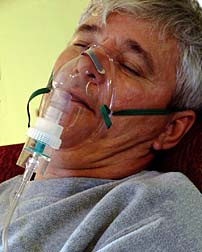 Nobody could figure out what was wrong with Walter--he was only 48 when these symptoms appeared after taking fen-phen.

"Over the last several years Walter got increasingly short of breath and the upper abdominal pain got worse," says Susie. "A gastro-intestinal specialist couldn't determine a cause and in April of this year, Walter was sent to hospital for more tests. He was admitted right away because his fluid retention was so high they were unable to carry out the tests."

Over the course of a week, Walter had a litany of tests and had a liter and a half of fluid removed from his upper chest area. He was put on medication that caused him to loose another 20 pounds of water weight. Next up, he was seen by a cardiologist who referred him to a pulmonary doctor.

"The specialist did some more tests and discovered that Walter had PPH," says Susie. "He had a test to check for arterial pressures in his lung and heart area. He was told by his pulmonary doctor that normal pressures are 20 and his was 120. When the doctor told us the diagnosis, he said he couldn't fathom the cause because my husband did not fit the normal criteria: PPH generally occurs in women between the ages of 20 and 30.

My husband had been overweight for years so I asked the doctor if his obesity had led to this. He said no, that obesity does not cause PPH. Then he asked us about past medications. 'Walter was taking a diet drug but that was many years ago,' I said. 'Do you remember what drug he took?' asked the doctor. 'Yes, fen-phen,' we both replied. 'Now I know the cause of your condition—it stems from having taken fen-phen,' said the doctor.

We were devastated because he also told us that with PPH, young women generally have 2-3 years life expectancy from diagnosis. We felt that we were hearing a death sentence. He then explained about the medication now available and treatment options and he felt that, with my husband's present activity level, he should respond well to this prescription medication.

More News
Cost became a huge factor. This medication costs about $4,500 per month-- $150 per day. He takes two pills per day. Our insurance covers all but 20% so we are responsible for $1,286 per month. Walter will have to be on this for the rest of his life.

We have been fortunate; a grant called "Caring Voice Coalition" will assist us financially for a time. We have to continue to re-apply--at present he is approved but only for the next three months.

We have also taken an equity loan on our home because his survival is the most important thing. The doctor said that this medication can prolong Walter's life 10-15 years. That is pretty much the extent of it.

He so regrets taking fen-phen—it was such a mistake. He doesn't fault the doctor who prescribed it but by the time Walter was told to stop taking it, the harm had already been done. We didn't know that PPH was lying in wait for him.