John Austin, 29, was a semi-pro football player until last year; that was when he was diagnosed with Primary Pulmonary Hypertension PPH. Two years ago, his doctor prescribed the diet drug Adapex to lose weight but he soon experienced chest pains and fatigue -now Austin won't be able to play another football game—ever.

"I started taking the [diet drug] two years ago," says Austin. "My doctor prescribed me 1 tablet per day--37.5 mg--to lose weight. I took that dosage for one year. I lost about 30 lbs but noticed that I was feeling tired all the time.

"Around 2003, I was prescribed meds for high blood pressure and it was under control but it began to spike right after I took the diet drug. So my doctor doubled the dosage and at the same time put me on different blood pressure meds." 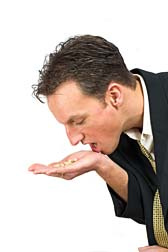 Austin was in good shape, even though he was overweight. He weighed 290 lbs when he first started taking Adapex but it didn't stop him from playing ball. But he started to get really tired. Around that same time, Austin and his family moved to El Paso.

More News
"I also had a lot of chest pains and my legs were killing me—a really heavy feeling," says Austin. "At 29 years old, I shouldn't be feeling this way. I saw a new doctor and he immediately took me off the diet pills and diagnosed me with PPH: pulmonary disease and hypertension because of the diet drugs. He said that it had nothing to do with my high blood pressure--and my doctor wrote that in his medical report. He has scheduled me for more tests which I will get in two weeks...this diagnosis has scared the hell out of me."

"I'm not doing this to make money—I am doing this for my health and my family," he says. "My doctor told me and my wife that I will have long-term effects. I am not able to play football anymore—I have no energy. I have a family to support—two kids, 11 and 6 years old. I have been working with the same trucking company for 12 years and don't know how long I will be able to work because I have a hard time getting up in the morning. I stay up at night because my legs are aching—sometimes I only get a few hours sleep."

Austin decided to join a PPH class action lawsuit and his attorney is currently getting all of his medical records together—beginning three years ago, when he was healthy and before he took the diet drug.