Attorney Patricia Oliver, who specializes in cases involving water contamination from oil production and waste injection wells, says people in and around Porter Ranch should be concerned about this gas leak, from benzene levels in the escaping gas to the SoCal Gas plan not to include a safety valve replacement on the well. 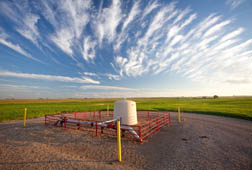 Even if you haven’t experienced any symptoms, such as respiratory problems, nosebleeds or nausea, Oliver urges everyone exposed to the Porter Ranch gas leak to relocate - now.

“I think we should all be concerned because this gas leak is something unprecedented and nobody knows the long-term effects,” Oliver says. “I have been there and it has personally impacted me; this gas leak is setting us all up for health problems” says Oliver.

How far will the methane “cloud” go?

To date, experts are still trying to figure out how far the methane cloud is expected to go. They do know that complaints have been reported 5-10 miles from the well. “We are trying to track how far the gas will travel when it was released from the wellhead, but we need to obtain from the State of California the test results from SoCal Gas,” Oliver explains. Once their experts have that data, they can take the molecular weight of gases and match them to the wind pattern to determine how much it will travel.

“We have been seeking this information from the state since December 1,” says Oliver.

SoCal Gas just proposed a plan to start burning some of the gas escaping from the damaged well, but how safe is that? Methane - one of the strongest natural greenhouse gases - can do much more than damage our planet - it can be deadly. When mixed with other chemicals, methane levels as low as five percent can become explosive and in higher concentrations, it can be deadly when ignited.

So why are SoCal Gas and public officials telling us it is safe? At the risk of being a conspiracy theorist, it’s sounding like a cover-up. Oliver says it is one big lie.

“Gov. Brown waited over two months to declare a state of emergency and during that time we are dealing with health issues, loss of income and more. Just nine days after the BP oil spill, the governor of Louisiana was dealing with it. Why was Brown absent? There is no justification except for a huge conflict of interest, both with him and his sister.”

Kathleen Brown owns more than $400,000 in Sempra Energy (it owns SoCal Gas) stock and she receives a yearly salary of $188,380 to sit on the Sempra board. Oliver says she is also the director of a group that is trying to develop part of Porter Ranch. And she is partner at Manatt, Phelps & Phillips, a law firm that represents the California Independent Petroleum Association.

How far away is safe?

“You should relocate to where you don’t feel like you are breathing gas, but realistically, close enough to schools and businesses where you feel comfy,” says Oliver. “Conservatively, I would move five or six miles away from Porter Ranch, and most people have been relocated at least 10 miles away.”

Unbelievably, the state of California has drafted emergency regulations, but one thing, which is of utmost importance but is not included, is the subsurface safety valve.

People are asking why this issue is dangerous. Think about it: the gas is injected underground in 2-inch casing. There is no rational reason to think this rupture couldn’t happen! The other 98 SoCal Gas wells all have the potential to blow like this one. We don’t know what is happening underground and with the water table down there.

More PORTER RANCH GAS LEAK News
Another lie: In 1979, SoCal Gas told state regulators that it replaced the safety valve on one of its wells, the LA Times (Jan 3, 2016) reported. Just last month, however (and perhaps after some digging by attorneys), Rodger Schwecke, a SoCal Gas executive, said in a public meeting that the valve was old and leaking and the company decided not to replace it because it was not a “critical well.”

Visit the Los Angeles Times for more information about the safety valve, or lack thereof.