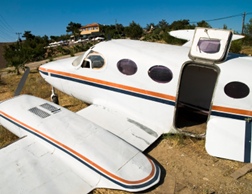 The crash caused fires on the ground and sent a wing from the aircraft into a house in front of a day-care center, but there are no reports of injuries on the ground.

The twin engine Cessna 310 belonged to a senior electrical engineer at Tesla. It is not yet known if the owner was piloting the plane, which was en route to Hawthorne, CA.

More plane crash News
The crash occurred shortly after take-off around 7:55 am, approximately one mile northwest of the airport. An eyewitness who was out walking her dog told NBC reporters that she saw a plane descend in a foggy sky and hit a 100 foot electrical tower, causing the power lines to swing back and forth in the air. There are reports of power outages in most of the city following the plane crash. "It burst into flames, and then it kept flying for bit before it hit some houses and exploded," Kate McClellan told NBC.

A second eyewitness who was working at the day-care center at the time of the crash said she heard a loud boom and thought it was an earthquake—but then saw a big ball of fire hit the side of the house. She reportedly yelled to the owners and their three children to get out, which they did just before the house went up in flames. "There are not even words to describe what it felt like," Pamela Houston told NBC. "I am very thankful to God that he allowed us to get out."

All the occupants of the homes in the area of the crash have been accounted for.