Returning home from a teachers' conference should have been the easiest part of Gint's trip but the erratic behavior of the pilot lead to an airplane crash. For Gint, the crash was followed by a year long nightmare as he continues to fight with the insurance company.

It was February 27, 2000 and Gint, a physical education teacher in Black Lake, a small community in northern Saskatchewan, was heading out of Edmonton on a Piper Navajo run by Athabasca Airways (now Transwest Air). The flight was due to leave the Stony Rapids airport at 5 pm, but was delayed as the pilot was a couple of hours late in arriving. When the pilot finally arrived, Gint thought he was acting erratically. 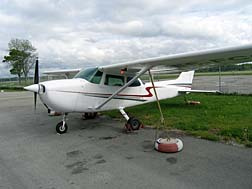 "He couldn't concentrate; he had black circles under his eyes. He repeated 'don't worry' three times," said Gint, adding that the pilot was wearing jeans, not a uniform. "Then he started throwing luggage—he was loading luggage and he dumped the luggage as he was pushing the cart. I was saying to myself, 'What the heck is going on?' It looked very suspicious."

After some hours, the plane was ready to take off and initially everyone onboard was in a jovial mood. But while the plane's engines were warming up just before take-off, they seemed to be revving pretty high. "I didn't know if that was normal or not," said Gint. "It sounded like Formula One racing."

The take-off was normal but Gint watched as the pilot kept looking behind his seat, as if he was searching for something. When they got closer to their destination, they were flying in heavy fog. The most bizarre thing was that there was no fog at a close-by airstrip and they could have landed there. In fact, an accident investigation report said that the pilot had said if he couldn't land after his second try, he would continue to the second airstrip.

The pilot started "weird maneuvers" and was getting too close to the treetops. Gint could see how close they were and was about to call out when the plane hit a tree. The plane crashed and went down; clearing almost a thousand feet of bush as it skidded along, eventually resting upside down. The pilot survived and came around to open the door to let the passengers out.

"The biggest mystery is how he survived," said Gint. "He had a punctured lung, broken ribs."

The plane crashed around ten that night and rescue didn't come until six the next morning. No one was killed but the injuries were tremendous. One teacher's chair broke free from the floor of the plane and flipped, causing the metal chair leg to pierce Gint's tibia. Luggage exploded on impact. One hockey bag was missing both ends. The zipper on a woman's jeans exploded.

"I was sitting on the ceiling upside down when my seatbelt broke," said Gint. "During the moment of impact, my seatbelt put too much pressure on my hips making them feel as though it crushed my tailbone. From the strength of the impact, my seatbelt broke. The biggest thing was very big whiplash. The biggest impact was on my neck and hips and inner ear damage from blood in my ear. I was dizzy when I closed my eyes—and that went on for a few years."

Both his Achilles tendons were stretched from the force of swinging forward. Even today, Gint's foot becomes hot; feeling like a razor is cutting it when he walks.

Yet it was Gint who was instrumental in the rescue. First, he dug out a woman who became trapped under the plane's wreckage. Then, using material from the plane, he made a fire that attracted the rescue plane.

"They sent a Hercules. It took time to come. The search and rescue couldn't see in the fog but they saw the fire," he said. "They had to chop bush to make a road to come in and get us with the ambulance. They dropped parachutes with people close to the morning."

The six passengers and pilot all survived, with the pilot and the woman pinned under the aircraft receiving the most serious injuries. "It took us digging for one hour to find her. She was between the ceiling and her seat, her neck got trapped."

More News
Since the airplane crash, Gint said that the airline has done little to help. There were empty promises of sending medical specialists to Black Lake to help with the extended recovery but none arrived. Only Gint's family physician has been available for medical advice.

Gint has sued the airline then felt violated and insulted when it hired surveillance to watch him to learn details of the extent of his injuries. The trial was scheduled to begin September 2007 but was rescheduled to 2008.

"I don't understand Canada," said Gint, who arrived in Canada from Lithuania in 1997. "After ten years here, a little bit I am turning into a bitter man. The drugs and painkillers have destroyed my digestion and kidneys. I am still on pills; still in pain. I try to be active but I feel like, you know, a trapped weasel. Life has trapped me in a corner and I don't know how to turn things around."