When the single-engine Cessna P206 plane crashed into a field in Lawrence County last month, two people were killed. One of those killed was a parachutist who had exited the plane as it was spiraling downward, out of control. Sadly, the doomed skydiver didn't survive after her reserve chute deployed too early, and became entangled in the tail. Beyond the fatal injuries she suffered, one can imagine the horror of her last moments. 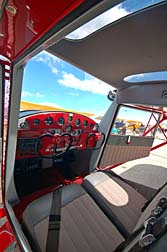 It has yet to be determined if the families of two parachutists killed in the crash—the doomed jumper entangled by the tail, and another who died in the plane's fuselage as it hit the ground—will be launching lawsuits. However, a surviving parachutist who suffered a broken right leg as she exited the out-of-control plane has filed suit against the skydiving company that oversaw the doomed flight, the owner of the company and the pilot of the downed plane, who survived but was critically injured.

Tera Smith, or Overland Park, Kansas was one of six parachutists aboard a flight organized by Freefall Express Skydiving, Inc. On that fateful day on April 19th, the aircraft had climbed to an altitude of 10,500 feet mean sea level, according to information provided to the National Transportation Safety Board (NTSB) by two of the surviving parachutists.

It was at this juncture that the pilot signaled one of the jumpers to open the hatch. Upon doing so, the parachutist noted that the plane had overshot the drop zone by about a mile, "and she informed the pilot," according to a preliminary report from the NTSB, much of which is used as the basis for the suit.

"The reserve parachute on the fifth parachutist deployed and became entangled around the tail of the airplane. She sustained fatal injuries. The sixth parachutist was found inside the airplane and was fatally injured. The pilot was flown to a Springfield hospital."

The two parachutists who died were identified as Freefall staffers Marnie Fuller, 36, of Mountain Grove, and Jennifer Collins, 32, of Peculiar. The pilot, while surviving, was critically injured in the crash and has yet to be interviewed by the NTSB as part of its continuing investigation.

It should be noted that Smith's husband is also getting into the act. Michael Smith, as part of the same suit, is claiming damages for loss of consortium, claiming the crash and injuries have deprived him of his wife's "support, services, consortium, care, companionship, comfort, instruction, guidance, counsel, training and love."

More News
Freefall Express owner Bryan Wolford was not available for comment. However, when contacted by a reporter from the Springfield News-Leader Wolford's wife Lyn Wolford would say only that the company was grieving the loss of two of its employees, "and everybody is just trying to deal with that," she said.

Freefall operates out of the Mt. Vernon Municipal Airport. However, various reports indicate that while the crash occurred in Lawrence County, the case will be heard by a Greene County judge, as Greene County has the only federal court in the area.

As the NTSB investigation continues, and information from the injured pilot is secured, all eyes will be on the litigation front, if for no other reason but to gauge how Michael Smith makes out with his claims…