On February 1st, a small plane carrying six people crashed, killing everyone onboard. The Beechcraft King Air C90A was trying to land in Mount Airy, NC traveling from Cedartown, GA. The twin-engine plane crashed into a neighborhood near the airport shortly after 11:30 a.m. There were reports of some low lying fog at the time. 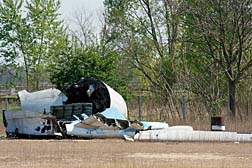 The plane crashed and broke in two, said some reports. It split in half after crashing between two homes. Luckily, no one on the ground was injured, said Warren Woodberry, a spokesman for the Federal Aviation Administration.

News reports said that the passengers in the plane were on their way to Primland, a hunting and golf resort near Dan VA, about 25 miles north of the Mount Airy airport. Apparently, the resort van was at the scene, awaiting its guests. Witnesses reported that the plane originally missed its approach while making its first attempt at landing and might have been circling back to try again. Tragically, there would be no second chance for the six people on board.

The area between the two homes was scattered with debris from the crash. One area resident said he was in the basement of his home when he heard a loud boom. He said it looked as if the plane just fell out of the sky.