California Mid-Air Collision: Could the Accident Have Been Prevented?

While investigators continue to piece together the events that led to Sunday's tragic mid-air collision between two light planes over the skies of Corona California, the five people who died have been identified.

Smiddy was the innocent bystander who was on the ground, inside a Chevrolet dealership when a piece of one of the planes pierced the roof of the building, and landed on top of him, crushing him instantly.

The crash occurred Sunday afternoon in what appeared to be ideal weather conditions. Skies were clear, and winds were reported calm when the two Cessna aircraft collided in the sky above a collection of car dealerships along the 91 Freeway. Eyewitnesses report that the slightly smaller of the two aircraft shattered on impact and fell from the sky in pieces, raining debris and a macabre collection of body parts onto the ground below. 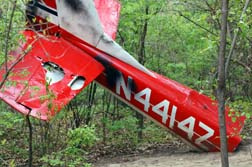 The larger plane remained pretty much intact as it spiraled out of control and slammed into the ground.

There were two individuals in each plane. There were no survivors.

Reports indicate that Sunday's crash was the sixth aviation accident in the last decade, in the area. This crash happened about a mile from the Corona Municipal Airport, which has an unmanned control tower. Pilots are required to us visual flight rules (VFR) when conditions are clear, and are responsible for avoiding other aircraft on their own. Without the aid of an air traffic controller, there is nothing to tell a pilot beyond his or her own powers of observation that another aircraft might be invading their airspace, or vice-versa.

Pilots have the option of communicating with other aircraft via radio on their own, but not all do.

More News
It has not been determined which plane was at fault, or the circumstances that led to the collision. Oddly enough, the fact that conditions were reported as near-perfect for VFR will make the job of investigating the collision all that much tougher for the National Transportation Safety Board (NTSB), given that weather most likely did not play a factor.

Rather, it may come down to pilot error, or a mechanical or structural fault in one of the planes.

It is also not known, or has yet to be determined if the un-manned status of the Corona airport tower may have contributed to the collision. One plane flying, for whatever reason into another plane's airspace, could be detected and the pilots involved forewarned, allowing for evasive action.

And while the four people in the plane who died would have assumed a certain level of risk by flying in the first place, the tragic death of Earl Smiddy on the ground could not have been foreseen.