Just an hour ago, a British Airways jet with 152 people onboard crash landed at London's Heathrow Airport, injuring a reported four-to-eight passengers. The plane crash landed short of the runway. Photographs show incredible damage with the plane's underbelly torn away and wings damaged. Emergency chutes deployed and all passengers and crew escaped. Amazingly, no one was killed in the plane crash.

Debris from the British Airways Boeing 777 was strewn across the runway, its wheels, detached, lay in the grass. It appeared, from photographs, that the entire underside of the airplane had been ripped away. The flight had just traveled from Beijing. British emergency services met the plane, enveloping it in foam to prevent fire.

Witness John Rowland told the BBC that the wheels of the plane appeared to collapse as it came down on the grass in front of one of Heathrow's runways.

"It crashed into the runway, debris was flying everywhere, there was an enormous bang and it skidded sideways," he said. 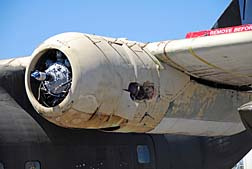 Passenger Jerome Ensinck told the BBC that he at first thought the plane had made a hard landing and that there was no indication that there would be a bad landing.

"When we hit the ground, it was extremely rough," he said. "Then the emergency exits were opened and we were all told we should go through as quickly as possible, and the moment I was away from the plane, I started to realize that the undercarriage was away, and we had missed the runway."

"Now I realize I've had a close call," he said.

Uninjured passengers were being cared for by airline staff at a center where they are being interviewed by police. The passengers have been described as being in good spirits but anxious to return to family and friends.

The pilot, said British Airways Chief Executive Willie Walsh, was one of its most experienced, flying with the company for almost 20 years.

More News
Reports indicate the plane had reported problems just 30 minutes before it crashed. The South runway remains closed at Heathrow, although the northern runway is still open. Coincidentally, Prime Minister Gordon Brown was preparing to leave for China from Heathrow on an official visit but his flight was understandably delayed.

Boeing spokesperson Liz Verdier said this Boeing 777 was the first Boeing 777 involved in an accident. Boeing 777s were entered into service in 1995.This particular plane was only six years old.

As scary as this crash landing was, it could have been much worse. Robert Cullemore of Aviation Economics, a London-based aviation consultancy, said the pilot kept the plane in the air long enough to prevent a disastrous outcome.

"If it had landed 200 meters shorter than it did, it may have hit perimeter fence and obviously some other buildings and the car park, clearly we would be dealing with fatalities and obvious damage," Cullemore said.