Only five days into the New Year, five people on their way to celebrate Russian Christmas were killed when the small chartered airplane they were riding in crashed, sinking into the frigid waters at the edge of the Kodiak State Airport. Also killed in the plane crash was the 50-year-old pilot, Robin Starrett.

It was shortly before 2 p.m. that the Servant Air Flight 109, a Piper Navajo N509FN crashed nose-first into the water just short of the runway. In news reports, State Trooper Spokeswoman Megan Peters said one of the survivors reported that shortly after take-off, a cargo hatch in the nose of the aircraft started to open. It is assumed that is why the plane was returning to the airport. But while turning around, the hatched opened fully and the aircraft lost altitude and crashed.

The plane, bound for Homer, Alaska, went in the water about 100 yards short of the north-south runway. Weather at the time was clear with temperatures in the twenties and winds gusting to 20 mph. 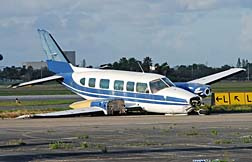 Four passengers survived, being plucked from the icy water by the pilot of a float plane, Dean Andrew, who was taxiing on the water nearby when he heard Starrett on the radio saying he needed to return to the airport.

In what can only be described as a double tragedy, Andrew was a friend of Starrett's and had remained nearby after hearing the call, in the event of a problem. He wanted to help his friend.

In news reports, Andrew said he had a feeling something might happen. When he heard control tower personnel directing crash vehicles, he radioed the tower to see if he could assist.

More News
With no time to lose, Andrew arrived at the site of the crash and saw two people injured, standing on the sunken fuselage, and two more in the water, one some distance away. He rescued the furthest person first, then the second person in the water, before finally rescuing the two on the fuselage.

Andrew said they were all hurt, one bleeding profusely. He awaited the Coast Guard and when it was near, only then did he leave the site to transport the injured to medical help.

Reports indicate that the deceased passengers were all fishermen, some just dropping their last loads, picking up their paychecks and heading home for Christmas celebrations. But for their families, there would be no celebrations, only grief and despair at losing loved ones, and confusion about how such a tragedy could occur.