Herb Velsor is an experienced pilot with over 20 years in naval aviation. He was also involved in a plane crash many years ago that resulted in two deaths (he was not piloting the plane at the time of the crash). Herb says that although planes are a very safe means of transportation, there are some issues that come up that can result in crashes. 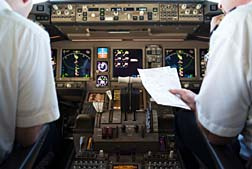 "Planes are very reliable," Herb says. "There is a very low risk of being involved in a plane crash. But, based on what I've seen, many accidents are maintenance related—things like a lack of quality control at the shop error. Sometimes it can be as simple as a problem with employee training. There were incidents where I've written reports for JAG (Judge Advocate General) on aircraft incidents that cost a couple of million dollars because of an error on the part of a technician. Pilot error also happens, resulting in crashes sometimes."

Approximately 40 years ago, Herb was involved in a plane crash that was found to be the fault of the other pilot, whose plane came too close to the plane Herb was in. Two people died in the crash. Herb says he walked away without a scratch.

"We were about 600 miles east of Hawaii," Herb says. "We were coming back from Japan and conducting routine flight operations. The pilots of the two planes knew each other and the other plane came up alongside us to wave. The pilot and co-pilot in the other plane switched seats and the pilot picked up a camera to take pictures. They moved too close to us and our propellor chopped his tail off. He ripped off our left engine, but we recovered after a few hundred feet.

"I was apprehensive about flying again because the accident was fresh in my mind, but I did continue to fly. I flew in everything they [the Navy] would let me fly in.

More PLANE CRASH News
"I don't know that there are more accidents now than there were before. From a casual overview I would say that plane reliability is greater now than it was a while ago. When I started flying, you couldn't fly transatlantic in less than a four-engine plane because you faced the loss of one engine in flight. Now, they go transatlantic on two engines, so they are more reliable."

Despite planes being more reliable today than they were before, accidents still happen and they are often tragic. Most common are small plane crashes, in which one or two people are killed. Those crashes rarely make national news and often go unnoticed outside of the region they occur in. But that does not make them any less devastating to the families of the people involved. Furthermore, no matter how good technology becomes, there is still a chance that human error, either in the plane or during maintenance, will cause an accident.