Looking at the vast sky, it seems impossible that, with all that room, two planes could ever collide in midair. Yet that is exactly what happens sometimes, resulting in tragic plane crashes. Most recently, three people died in a collision between two single-engine planes near Rock Springs. One plane was taking off while another was attempting to land. The National Transportation Safety Board is investigating the crash. 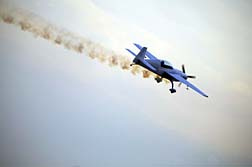 The truth is that mid-air collisions do happen. Sometimes, they are the result of a lack of control towers in the area. According to local news, the Rock Springs airport does not have a control tower and one of the pilots was not communicating with regional FAA traffic controllers, which is common for private pilots who are flying in clear weather. Debris from the crash scattered over five acres.

Furthermore, that does not include the number of "go arounds," incidents in which one plane has to "go around" another because they are both accidentally on the same runway. Some air traffic controllers say that happens far more frequently than passengers realize and often mean that planes have very close calls on the runway and in the air.

According to the Los Angeles Times, on June 13, a plane leaving Hawthorne Municipal Airport made a wrong turn and almost collided with two jetliners that were preparing to land at LAX. According to air traffic controllers, the only thing that prevented a midair collision between the planes was luck.

More PLANE CRASH News
Regulations state that pilots must maintain either three miles of lateral separation or 1,000 feet of vertical separation between planes on a final approach for landing. However, in this instance, the charter plane was only 1.7 miles from one jetliner and on the same altitude. The charter plane then passed the other jetliner at only 1.62 miles with an altitude difference of only 400 feet.

Of course, when planes collide the result is almost always deadly. If the planes collide on the ground and at low speeds, then passengers stand a chance of escaping serious injury if they can evacuate the planes quickly enough. However, if the planes collide in the air or at high speeds, then the crash is most likely to be absolutely devastating. That is why it is vital that all people in control of a flight, from the pilots to the air traffic controllers, be paying the utmost attention to what they are doing. Furthermore, all mechanical components of the plane must be functioning properly as well, in order to avoid collision.

If you or someone you love was injured in a plane crash, contact a lawyer to discuss your options.