In what could have been an absolute disaster in another plane crash, two planes narrowly escaped a collision at 25,000 feet above Indiana on Tuesday. According to the Federal Aviation Administration, which has conducted a preliminary investigation, the near miss was caused by an air traffic controller's error.

The incident occurred at the end of the controller's shift at the Chicago Center radar facility and happened after he directed a Midwest plane flying east from Wisconsin into the path of a United Express jet heading west out of North Carolina. According to the FAA, the controller was tired and forgot about the United Express plane when he took off an electronic identification tag from his radar screen to give the plane to different controllers.

There were 24 people on board the Midwest flight and dozens on the United Express jet. According to Midwest Airlines, none of the passengers realized how close they came to being in a collision. But they were actually within 1.3 miles horizontally and 600 feet vertically of colliding. The FAA requires a five-mile horizontal and 1,000 foot vertical separation distance. 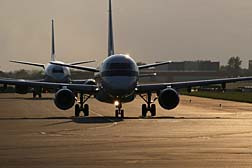 Luckily for everyone on board the two planes, a collision-avoidance device in the Midwest plane alerted pilots to the problem and the pilots quickly executed an emergency climb to avoid the collision. The two planes, which were approaching each other at a combined speed of more than 700 miles per hour, were within 10-15 seconds of a possible collision.

According to [The New York Times,] the FAA classifies radar control errors on an A-through-D scale, with A being the most serious errors. This error was classified a B-grade mistake. This is the third B-grade error in just over six weeks at the radar control center, whereas in the previous 12 months there was only one B-grade error at the facility. Questions are now being raised about the safety of planes in the area around Chicago, especially as the holiday season approaches.

More News
There are also concerns about the workload of air traffic controllers, especially in light of a recent wave of retirements at the facility. On the night of the incident there were 11 controllers, five trainees and one supervisor working. Usually there are at least 12 controllers and two supervisors present. Air traffic controller union officials complained that the radar control center is understaffed and controllers are overworked. The officials argue that the Illinois facility is short nearly 100 fully trained employees because it takes up to five years to train new controllers.

Luckily for everyone involved in this incident, the planes were able to avoid each other and avert disaster. However, in many incidents involving planes the ending is not nearly so happy.