When Planes Fall from the Sky

They were small planes, mercifully. Two passengers in each. But there were no survivors, and the horrendous aftermath of two small planes colliding in mid-air, at mid-day above Corona, California gives pause to wonder how such an accident can happen in the first place.

The collision occurred Sunday, January 20th at about 3:35pm California time near the small municipal airport at Corona, about 40 miles southeast of Los Angeles.

Reports indicate that weather conditions were favorable, and there had been no reports of distress calls. The Corona airport does not have a staffed control tower. If there were distress calls from either of the two Cessnas, it is not known if there would have been anyone available to respond to them. 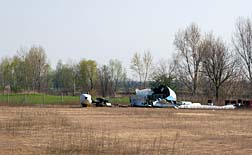 Eyewitness reports indicate that after the two planes collided about a mile from the airport, debris and bodies rained down onto a car dealership below. One body slammed into the roof of a Mustang on the outdoor lot.

Most of the debris rained down on a collection of car dealerships near the freeway.

A fifth person was also killed. The doomed citizen was on the ground, inside a Chevrolet dealership, when debris hit the building.

Until any subsequent investigation draws any conclusion as to the cause of the mid-air collision, one can only presume what may have happened. And while it is true plane crashes get much more play in the mainstream media than car crashes (which are much more frequent), at the same time it is unsettling to hear of such collisions happening in broad daylight, with good weather.

One also has to wonder, with the increased popularity of light air travel for business and recreation, about the wisdom of allowing a control tower to remain unstaffed, and especially on a Sunday when, presumably, there would be more recreational flying taking place.

And the tragedy of a mid-air collision extends, in this case, to innocent bystanders on the ground. The unfortunate individual who died tragically when hit with debris from the plane raining down, would not have had any inkling that browsing for a car could carry such risk. Go for a ride in a plane—of course, there is always the risk of mechanical or structural failure. Planes can, and do fall out of the sky.

But what are the odds of shopping for a car, strolling through the showroom, only to have debris from a small plane end your life prematurely?

A sad day for the families of all five people killed yesterday. But even more sadness for the family of the innocent individual who did nothing riskier than drive to the car dealership, to pass a couple of hours on a Sunday afternoon. An innocent bystander, doomed by a plane crash, but nowhere near a plane.

The fact that what goes up must come down is a fact of life for air travelers, and people who work in the industry. But when the planes come down, they have to come down somewhere, and often it comes with tragic consequences for those innocent bystanders on the ground.

Sadly, in this case that wasn't possible. Mercifully, there were no additional deaths on the ground. There could have been more.