More plane crash News
A small plane crash on an interstate highway in Michigan's Upper Peninsula has killed the 73-year old pilot and three of his granddaughters who were also on board. His 13-year-old grandson, also a passenger, was hospitalized with injuries after being ejected from the Twin Engine Beechcraft Model 58 on impact. The only survivor, he has burns over half his body. 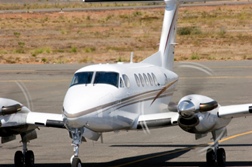 The children who were killed are Rikki Menora, 16; Rachel Menora, 14; and Sara Klein, 17. The family was visiting from Israel for a week, said Sema Menora, widow of pilot Moshe Menora.

According to police, the Beechcraft was at less than 1,000 feet, having just taken off from the Mackinac County airport, when it encountered engine trouble. The Associated Press reports that the plane flipped after striking a median barrier on Interstate 75. The plane came to rest on the road shoulder, roughly 250 miles northwest of Detroit.

The Menoras were reportedly on a day trip to Mackinac from Chicago. They took off at around 10:15 Tuesday morning.