The Crash of Flight 3407: Did the Crew Over-React?

A week after the fatal plane crash of Continental Connection Flight 3407 into the town of Clarence Center near Buffalo, killing 49 people in the air and 1 on the ground, investigators are now looking at the actions of the flight crew inside the cockpit of the Bombardier Dash 8 twin turboprop commuter plane. 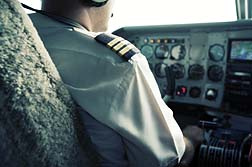 Specifically, according to unnamed sources, they are looking at the events surrounding the engaging of the aircraft's anti-stall mechanisms and the crew's response to what normally happens when the stick-shaker and stick-pusher is engaged. According to information from the online edition of the Wall Street Journal Wednesday—as reported in the New York Times—the crew may have over-corrected the plane and pushed the nose too high, causing a stall that the anti-stall system was trying to prevent in the first place.

Investigators are also looking at the type of aircraft that pilot Marvin Renslow had been flying before switching to the Dash 8 in December. Previously, he had flown a smaller turboprop, the Saab 340, which behaves quite differently when icing conditions—which were present to some degree on the night of February 12th—are a factor.

Officials with the National Transportation Safety Board (NTSB) are quick to point out that the investigation would likely take months, and no conclusions have been determined. It is also important to point out that pilot error has not been established, nor is that accusation even being floated. However, as the NTSB investigators continue to painstakingly dissect the final few seconds of Flight 3407, attention is now being shifted away from the weather conditions and the icing experienced by the aircraft, and the response of the crew when the anti-stall device activated.

It is well-documented by now that Flight 3407 was flying on autopilot as it made its final approach to Buffalo Niagara International Airport—a protocol that is quite normal, even in inclement weather.

However at 26 seconds before the plane slammed into the house, an anti-stall device known as a stick-shaker and stick-pusher engaged. The anti-stall device is designed to warn the pilot in no uncertain terms when the plane is about to go into a stall. When this happens, the yoke begins to shake and the autopilot is kicked off automatically. If the pilot fails to take corrective action in the first few seconds of this happening, the second half of the anti-stall mechanism known as the stick-pusher automatically moves the yoke forward, which succeeds in dropping the nose of the aircraft down in order to achieve additional speed and increase lift, to avoid a stall.

However, in this particular case the anti-stall mechanism engaging when it did, does not necessarily suggest the plane was flying so slow that a stall was imminent. In fact, according to reports when the aircraft's deicing systems are engaged, the anti-stall mechanism will take into account the possibility of ice-buildup on the aircraft and actually engage sooner than it might otherwise, in order to widen the margin of safety.

NTSB investigators are still trying to piece that part of it together. However, the question now is when the stick-shaker and stick-pusher engaged and the system nosed the plane down automatically in an effort to gain speed and avoid a stall, why did the pilot pull back on the yoke to bring the nose of the plane up?

In normal stall avoidance, according to reports, the nose of an aircraft is pointed downward and power is reduced, not increased, in an effort to increase speed and generate additional lift. However, in the case of Flight 3407, the nose of the plane was brought up—instead of left down—and the engines were advanced to full power.

Investigators are working on the theory that the pilot, and not the First Office was at the controls at the time the plane went down. Assuming that Marvin Renslow was at the controls in the final, fateful seconds of Flight 3407, attention has begun to turn to the plane he had been flying just a few months prior.

The Saab 340 turboprop, according to a report in this morning's edition of the New York Times, is subject to a problem in bad weather known as tailplane icing. In this scenario the tail, which applies downward pressure to the back of the plane that helps to keep the nose of the aircraft up, can fail in icing conditions. There is speculation, therefore, that Captain Renslow may have been sensitive to the possibility of the nose dropping when icing conditions were present.

Given that the stick-shaker and stick-pusher was a sudden onset, the Captain would have reacted according to his training, but also his instinct. Speculation might suggest that in the first agonizing seconds of the onset of a sudden, unforeseen event, the pilot may have instinctively reacted as he might have, had he been flying the Saab 340.

It is not known how long Captain Renslow had been flying the smaller plane, before switching to the larger, 74-seat Dash 8. NTSB investigators at the crash scene have reportedly said that the larger Dash 8 is not susceptible to tailplane icing, in the same way as the Saab 340 is.

Investigators are analyzing the flight data recorders, to determine if the stick-shaker and stick-pusher mechanisms engaged appropriately. However, focus is increasing on the actins of the flight crew, and why the nose of the plane was pitched up as high as 31 degrees following de-activation of the autopilot with the triggering of anti-stall warning devices.

A former NTSB investigator has reportedly suggested that such a dramatic pitch upwards, at 31 degrees, would be an appropriate response in an emergency when trying to avoid another aircraft, or to avoid flying into a mountain. A pitch of 31 degrees up is a severe pitch.

More Plane Crash News
It has not been established that the plane was flying dangerously slow and close to stalling speed. The autopilot controls the flight dynamics of the aircraft and keeps the plane on course, but does not control speed. Investigators are not yet ready to cite human error as the cause of the crash.

However, evidence appears to indicate that the plane had not stalled when whomever was at the controls—presumably the Captain—pitched the nose up. With the nose that high, the wings would have stopped generating lift, causing a stall. As it happened, the nose then fell to a steep angle and the plane rolled over to 104 degrees while falling 800 feet in five seconds.

Seconds later, it dropped onto the top of a house in Clarence Center, just northeast of Buffalo. All on board died, as did one person in the home. Two other people in the demolished home, survived.