A float plane with eight people aboard crashed in the Gulf Islands of British Columbia late Sunday afternoon, injuring two and killing six, including a baby. The pilot and a female passenger were pulled from the water alive shortly after the plane crash and are expected to survive. 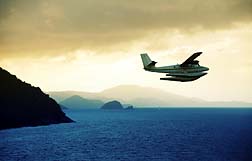 According to CBC.ca this morning, it took divers eight hours to find the wreckage of the Dehavilland Beaver aircraft. The six bodies were discovered in the wreckage of the plane, which was submerged in about three meters of water in Lyall Harbour off Saturna Island.

The plane went down at 4:10pm PST on Sunday afternoon. What caused the crash is not certain. Troy Haddock, maritime co-coordinator for the Joint Rescue Co-ordination Centre in Victoria, told CBC News that "the (National) Transportation Safety Board (NTSB) will be most likely raising the aircraft and investigating further for damage and cause of the accident. The reports that we have are the doors were open, there was some twisted wreckage, but that's all the details we have now."

While the pilot and a female passenger escaped from the plane within minutes, the remaining six occupants were trapped in the aircraft as it went down.

The sound of the float plane "crumpling" sent eyewitness James White rushing to his skiff to look for survivors, but by the time he reached Lyall Harbour, the plane had already slipped beneath the water.

"There was no sign of anybody else or any other debris from the aircraft so I think it probably sank pretty fast," White told the Canadian Press (CP) in a telephone interview.

More AIRPLANE CRASH News
White said he heard the engine of the plane making its regularly scheduled take-off from the harbor, then "a kind of crumpling noise soon after that." White headed to his dock and jumped in his small aluminum skiff in search of survivors. "By the time I got onto my dock, the plane had disappeared. It had gone beneath the surface," he said. "So I got into my boat towards where I thought that I'd seen it and I saw two people in the water who were alive."

He found a woman and the pilot close together in the water, both conscious and begging for help. "From what I could see, he had a bad bash on his head and his arm was broken and he has some other injuries," said White.

CP reports that the bodies were sent to Royal Jubilee Hospital in Victoria. There was no word on the identities of the victims. Meanwhile, the investigation has been turned over to the NTSB and the RCMP.

Saturna Island is located at the eastern edge of the Gulf Islands, about 35 miles south of Vancouver.