In what witnesses describe as a horrific air disaster, a Spanair jet loaded with what were presumably vacationers on their way to the Canary Islands crashed and burned today on takeoff at the Barajas Airport in Madrid, Spain—killing the majority of its 167 passengers. Late today, reports indicate 153 dead. 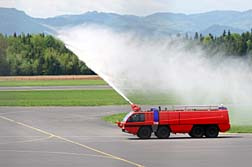 So far there is no determination as to what went wrong and certainly far too early in the process to arrive at any conclusion. However, what IS known is that the plane aborted its first takeoff attempt for reasons that were not identified, save for the fact it was technical in nature. On the second attempt, Spanair flight JK5022 failed to clear the runway and crashed into a wooded area at the end of the runway at Terminal 4.

The crash was violent, given that witnesses describe the plane as winding up in "a thousand pieces." Also, given the fact it was at the beginning of its flight, the airliner would have been loaded with a full compliment of fuel.

Several of the passengers were burned.

One witness was said to have claimed seeing the left-hand engine "burning" at the time of take-off, suggesting a problem with one of the plane's engines.

Today, even while planes were continuing to land at the airport (none were allowed to take off) bedlam ensued as fire trucks poured water on what was left of the plane, and a fleet of 22 ambulances were dispatched to removed the living, and the dead from the doomed plane. Eleven fire trucks responded.

It was reported that burn victims were sent to Hospital de La Paz, and that stricken relatives were sequestered at Las Palmas airport on the island of Gran Canaria, where they were comforted by psychiatrists with the International Red Cross.

The Canary Islands is one of the most popular vacation spots off the coast of West Africa. The contents of the passenger manifest is so far not known, thus the nationalities of the dead and injured are also a mystery—however it has been reported that he passengers may be primarily of German decent due to the fact that it was a 'shared-code' flight with Lufthansa. There were 167 passengers on board, with six crew.

While the type of plane was not identified, Spanair has been described as a subsidiary of Scandinavian Airlines Systems, and is one of the three main carriers serving the Spanish market. It is also considered a 'budget carrier.'

One official, who spoke on condition of anonymity, told CNN that one of the surviving passengers report some kind of explosion and fire at the back of the plane, just before the accident happened.

It has been reported that an investigation crew from the National Transportation Safety Board (NTSB) in the US has been dispatched to help with the investigation. Certainly, the maintenance records and age of the plane will be taken into consideration.

More PLANE CRASH News
It should be noted however, that while it is too soon to comment on the cause of the crash, the global airline industry has been in crisis of late, given mushrooming fuel prices and runaway operating costs. Much has been written about the mean age of the planes flying the skies, and maintenance notwithstanding, concern has been expressed in general terms with regard to just how old must a plane be, or how many hours of service has it logged, before it is taken out of service. Issues such as engine vibration and metal fatigue, and the relationship between the two, have been raised over the years when various air accidents affecting the fuselage have spawned debate.

The plane was delayed on the ground for an hour before the crash, but there was no reason given.

This is by far the worst air disaster since 1983 when two Spanish airliners collided while taxiing for takeoff, taking 83 lives.

It is assumed, as information comes out, that the families of those killed or maimed will be seeking compensation from the airline.