The pilot of a single-engine Cirrus SR22 was killed in a plane crash late Friday afternoon in the town of Morton, southwest of Mount Rainier in Washington State. He left behind a wife and two children, aged six and eight. 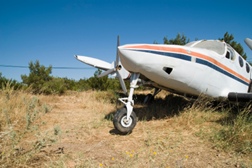 The only occupants of the plane a the time of the crash were thirty-nine-year-old Shane Sullivan, president of Cascade Risk Placement, an insurance company based in Bellevue, and an unidentified 27-year-old woman. The injured woman, who is a colleague of the late Mr. Sullivan, was airlifted to Harborview Medical Center in Seattle. As of Saturday night she was listed in serious condition.

According to a report on Kiro TV News, witnesses saw the plane fly low and silently, clipping several trees, before they heard a loud boom.

More plane crash News
Shane Sullivan's wife told the local paper that her husband loved flying, and that he was returning from a business trip when the crash occurred. She told the Seattle Times that her husband traveled frequently for his job, mostly up and down the West Coast. His pilot license was up to date, the aircraft had undergone its annual inspection just a month earlier, and Shane was meticulous about keeping up his aircraft. "He had a full overhaul of everything," his wife said.

The crash is under investigation. According to authorities at the Federal Aviation Administration and the National Transportation Safety Board, the wreckage has been documented, as well as the site where the crash occurred, and the wreckage will be removed to a secure storage facility where the cause of the crash can be determined.