"We thought they were just clear-cutting across the street and next thing we knew, chicken houses were built," says Kasie. "This is more than a farm nuisance: it is a factory that hurts not only us but farmers and communities."

Kasie moved to Byrdstown three years before four chicken houses with 34,000 birds in each house were built-- directly across the street from their home. 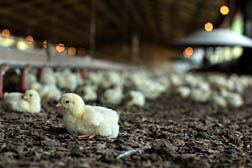 The name of Kasie's town may be ironic and possibly funny, but it's no laughing matter for Kasie and her family, including two young kids. "I am concerned about their health," she says. "My youngest has allergy problems year-round; our friends who live 10 miles from here had a chicken house built nearby and they can no longer use their spring—when it rained the water from the chicken houses got into their spring and contaminated it.

"My kids are six and four. They stay inside when it smells and if they want to go outside, we have to drive them to town so they can play at school--we don't have parks in this rural community. They see feathers everywhere; they know what is going on. At night when the air changes, the kids come in the house and say they can't play because of the chicken poop."

Cagles Farms, now called The Equity Group, built the chicken houses. They supply chicks to the landowner who returns them to Equity six weeks later when they are ready for market. This is the part that gets tricky: Equity apparently has a verbal 'good neighbor policy' whereby the landowner (who maintains the chicken houses) is supposed to obtain neighbors' permission first. "If any of us opposed the idea, The Equity Group would not build the houses," says Kasie.

But the landowner never asked them. When Kasie called Equity, "they said the landowner gave the go-ahead and the contract had been approved." So much for the 'good neighbor policy.'

"Now we live across the street from stench," says Kasie. "We complain to Equity about a number of issues: stench, flies, feathers, traffic (we are 500 feet from the houses)--the semi-trucks start breaking right in front of my house. Trucks drop off the chicks, pick up the chickens and manure, vans and cars bring in workers...

Stench
"It is different every day. We know when it is time for the chickens to be picked up: the ammonia is so strong, the feces is horrible. They are usually picked up at night and the next day the house doors are opened. The ammonia is strong for about four days then they clean out the houses with a tractor that pushes all the waste out. The waste is piled up until somebody buys it. From the waste, you have flies and dead chickens—the ammonia gets so strong the chickens die. We have the smell of rotting chicken and the maggots are growing out of the dead chickens. Then we have stray dogs and they are eating the dead poultry.

We have about 10 days out of the month that it doesn't stink but we can't ever hang laundry out, never open our windows and turn off AC in our cars down the road. If not, chicken smell gets into the car. If you don't do this, next morning it's chicken poop right in your face.

Equity group asked us what they can do about it. We have asked them to buy our house. Instead they offered to plant trees in front of the chicken houses but that won't get rid of the smell.

Property Value
We couldn't believe this was happening to us. If the landowner asked before it was built we would have been able to move. Instead, we've had our house listed for almost two years - we had 10 people look at it and eight of those 10 said no because of the chicken houses. The other two didn't give a reason.

Our realtor said we will just have to find the right person. But having two kids and keeping your house listed for years isn't easy - keeping it immaculate and having to leave the house whenever they call is difficult. Our land taxes did go down but that's little help. We are going to re-list our house in the spring - it is the only thing we can do. The city is passing zoning so we hope to move inside city limits.

More News
Our neighbors across the street complain about it all the time. We complain to our local politicians and we were told at the last meeting that if we didn't like agriculture, we should out of the county. We'd love to move but who wants to live here?

Recourse
"We called the Environmental Protection Agency (EPA) to have the ground checked for contaminants. The EPA said they didn't know about these houses and they are running without a permit. Apparently they can run without a permit as long as they apply for one!

We've all been told the same thing: Tennessee is a farm state. The only grounds we have are civil lawsuits and the juries are farmers. But these chicken houses are hurting real farmers because they are producing such quantities that a farmer has no way of competing with-- he won't make 1.4 million chickens in 6 weeks. These places are factories, not farms."

Posted by
Brenda
on February 4, 2017
We had no ideal that a chicken house was being build across from my neighborhood I didn't think it was going to be a big problem it's been there about a year now I can't even go outside the smell is the worst thing I ever smelled in my life I can't hardly breath it stinks so bad I'm having headaches and I feels like I'm going to pass out the smell is all in my home something has to be done it's changing my breathing I can't hardly breath
Posted by
Kay Smith
on September 8, 2016
I understand exactly what you are talking about with the problems with chicken houses. I live by 8 of them 4 which are just maybe 50 feet from my land line. My son is 16 never had any allergy problems but now he is allergic to everything chicken dust , feathers etc. we can't go out anytime without smelling this stinch and chicken feathers all over our yard, cars, etc. In the evening you can see a full fog across our yard and all down our road from the chicken houses and you can't breathe when you go outside... I can call environmental services and they help get the problem bearable for a little while then it doesn't last long it starts right back..... We live in Henagar Al. And this is awful my son has to wear a mask to go outside... And mowing is awful it blowers the feathers and stinch even more....