A collection of commercial soda fountain machines in 30 fast food restaurants within a 22-mile radius of Roanoke, Virginia have tested positive for coliform bacteria, according to a recent study. The results could possibly reflect the presence of fecal contamination. 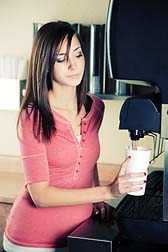 The US Environmental Protection Agency (EPA) requires that all drinking water samples test negative for E. coli. However, a study published in the January issue of International Journal of Food Microbiology revealed that "the large number of beverages and soda fountain machines containing E. coli is still of considerable concern... and suggests that more pathogenic strains of bacteria could persist and thrive in soda fountain machines if introduced."

Nearly half of the 90 beverages from both self-service and employee-dispensed machines—48 percent—tested positive for coliform bacteria. Eleven percent tested positive for E. coli and 17 percent contained Chryseobacterium meningosepticum, which can sicken newborns or adults with weakened immune systems.

At this point it's unclear how the beverages became contaminated. "It could be from dispensing with a hand that wasn't clean or using wet rags to wipe down the machine," Godard said. "We haven't done the work to really identify those potential sources and how these bacteria get established."

More FOODBORNE ILLNESS News
It should be noted that there have been no outbreaks of illness in the area served by the restaurants.

Various associations have also weighed in on the story. The National Restaurant Association commented, "While the results of this study are disconcerting, we feel that it isn't representative of our industry and that our guests can safely enjoy beverages from dispensers and single-serve containers alike."

"Fountain beverages are safe," added a spokesperson from the American Beverage Association, which represents hundreds of beverage producers, distributors, and franchise companies. "Consumers can rest assured that our industry's fountain beverages pose no public health risk. Importantly, our industry meets, and often exceeds, all government health standards in bringing its products to market."