Deadly Bridge Collapse in Minneapolis: Who Dropped the Ball?

Imagine driving to work, as you do every day, only to have the bridge underneath you suddenly give way and collapse. That's what happened to scores of people last year after an unsafe bridge in Minneapolis simply gave up, killing 13 people and injuring 145.

Now it's been revealed that not only was the bridge not safe, but that transportation officials were told for 17 consecutive years that the bridge was not safe. They allegedly did nothing about it. 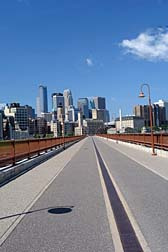 We all recall the images last August 1st, of heaving asphalt, crumpled steel and what was left of cars and their passengers trapped therein, disappearing into holes. Pity the people driving underneath the bridge at the exact instant the structure, with all its weight, fell in on top of them, killing them instantly or horribly maiming them for life—not to mention the psychological impact of having something like that happen to you. The images were disturbing enough for those of us watching the disaster unfold on television, from the comfort of our own homes.

The tragedy is that it appears it could have been prevented.

What caused the collapse of the 40-year bridge, located in downtown Minneapolis along Interstate 35 west will ultimately be left up to the National Transportation Safety Board (NTSB) to decide. However, what is now known, and becoming increasingly clear is that a number of warning signs and red flags were left unheeded.

An investigation compiled by a Minneapolis law firm retained by the state legislature to study the collapse is highly critical of the Minnesota Department of Transportation (MDT), and reveals that concern for the structure had been raised for nearly two decades.

Investigators have cited a pattern of missed opportunities to address various concerns about the bridge before disaster ultimately struck, together with various policy violations. Inspection reports were found to have failed to quantify the severity of corrosion. Officials claimed that they had not known that their responsibilities included reviewing such data.

Debate rages as to whether or not the bridge collapse was hastened by a design flaw, a flaw which might have been exacerbated by the placement of heavy construction equipment on the structure just before it suddenly buckled and crashed down into doomed motorists below.

Regardless of whether the collapse was ultimately caused by design flaw, or poor maintenance—or both—focus continues to fall on the MDT.

The NTSB has yet to complete its investigation, and has yet to definitively state its position on the collapse. However, it has been reported that public statements by NTSB officials thus far appear to point to a design flaw when the bridge was being planned in the 1960's, compounded by the added weight of construction equipment and where that equipment was placed.

While some are putting blame on the Minnesota state governor for failing to support appropriations for roads and bridges, few are willing to assign any blame until all the data is in. The NTSB has yet release its final report. However, the investigation released Wednesday is telling, given revelations that state transportation officials had deferred recommendations to make the bridge safer, had failed to follow their own inspection protocols, and at times had allowed financing concerns to affect how it was maintained.

In February the longtime state transportation commissioner was removed, reportedly after years of criticism surrounding the department's performance.

More News
The collapse of the bridge, and similar incidents in recent years have fuelled concerns over the general health of the country's bridge infrastructure, much of which was installed in the 1950s and 1960s and has aged a half-century since then. There are fears that vehicular traffic, including a proliferation of heavy trucks, has grown to levels not foreseen by those who designed the structures in the first place. And yet, there appears to be little political will to address the issue, or release funds to either properly fix, or replace infrastructure now 50 years old or more.

While discussion continues amongst those in the design flaw camp, vs. those in the poor maintenance camp in Minneapolis, the fact remains that 13 people died and scores more had their lives forever changed when a section of I-35W suddenly fell on top of them, or sank beneath them.

Whoever dropped that ball, will have it lobbed back at them in the courts of law.