Perils of Lasik: Double Vision, Eye Pain and even a Suicide

Colin Dorrian was a promising law school student when he sought relief from a chronic dry eye condition by undergoing Lasik laser eye surgery. However, rather than improving his vision and freeing him from his contacts, the procedure left him with so much eye pain and fuzzy vision that after six years, he took his own life. 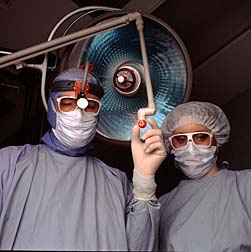 "As soon as my eyes went bad, I fell into a deeper depression than I'd ever experienced, and I couldn't get out," the doomed man wrote in his suicide note.

Lasik surgery has exploded in popularity in recent years, as clients with increasing amounts of disposable income and the vanity needed to throw away their glasses and contacts for good, go under the knife at a cost that averages about $2000 per eye. Radio, TV and magazines burst with advertisements for a procedure that boasts a high success rate—and indeed the vast majority benefits with 20-20 vision, or better.

But not everyone. Approximately one in four patients who seek Lasik laser eye surgery is not a good candidate, and a small fraction—about one per cent or fewer—suffer serious, life-changing injuries and side effects.

As the popularity of the procedure grows, that one percent equates to more, and more people.

Matt Kotsovolos has a story of his own. An employee of the Duke Eye Center in 2006, he underwent a more sophisticated Lasik procedure that year and was pronounced a success with 20-20 vision. However, it has not been a good experience for Kotsovolos beyond his improved eyesight. "For the last two years I have suffered debilitating and unremitting eye pain," he said last week in comments published in the New York Times. "Patients do not want to continue to exist as helpless victims with no voice."

Scientific advisers reporting to the US Food and Drug Administration (FDA) are recommending that the FDA mandate clearer warnings for Lasik. At a hearing Friday in Washington, David Shell testified as to the reality of his world, and his vision since undergoing Lasik in 1998. It was reported that he displayed large photos showing halos around objects and double vision—a representation of his eyesight since having the procedure.

"I see multiple moons," he is reported to have told the hearing participants in anger on April 25th. "Anybody want to have Lasik now?"

Admittedly, success rates for the 10-year-old procedure far outweigh the adverse outcomes. The dissatisfaction rate is, generally, thought to be five per cent in the general population, but the most stringent data comes from the military, which suggests a one per cent rate of debilitating adverse effects. Lasik was cleared last year for both Navy aviators and NASA astronauts, and the military is bullish about Lasik's effectiveness and prospects.

However, Dr. Jane Weiss of the Kresge Eye Institute in Detroit and Chair of the FDA advisory panel, commented at the hearing, "This is a referendum on the performance of Lasik by some surgeons who should be doing a better job."

Ensuring, for example, that individuals thought to be poor, or even borderline candidates, are properly refused the procedure. It's not for everybody including, according to the majority of those sitting in the panel in Washington last Friday, a lot of doctors. Most were sporting glasses.

Weiss, herself an ophthalmologist, offers Lasik to her patients but will not entertain the risk herself. She continues to wear glasses. Dr. Weiss maintains it is not a question of whether or not Lasik is good or not good, but rather the procedure is good, "but not good for everyone."

More News
Critics of Lasik say that the FDA should mandate a better understanding of the risks, and exclusions associated with Lasik. For example, people with large pupils or severe nearsightedness are generally disqualified from having Lasik. As well, it needs to be understood that people who successfully undergo Lasik to fix their nearsightedness will be guaranteed to require reading glasses at middle age.

At the end of the day, there needs to be a better job done of educating the public on the risks, as well as the benefits of Lasik. Everyone will tell you that Tiger Woods is a satisfied Lasik client, thanks to savvy marketing. But few will have any clue as to the potential for adverse side-effects, such as an increased propensity for dry eye and the night-time glare that can make oncoming headlights appear as huge starbursts of light.

"Too many Americans have been harmed by this procedure," says David Shell in Washington on Friday, "and it's about time this message was heard."

Posted by
Richard Green
on January 28, 2019
25 years of severe chronic dry eyes, eye pain, headaches, and wanting to die. Stacks of medical records and no help. 13 years ago had all 4 punctal plugs installed that helped a lot but still greatly disabling and depressing. Effects my everyday life, my kids and ended my marriage. Work is nearly impossible. I still welcome death everyday. Lasik needs to be stopped. And it doesn't even last long enough to be worth the risk of permanent eye damage. I'm sure I told them before my surgery that I had chemical burns to both eyes and could no longer wear contacts as a result. So both chemical burns and lasik can cause damage to the mucin layer. I just wander how many suicides are related to this but not documented.