Cell Phone Use and Cancer: The Debate Continues

The recent discovery of, and surgery for a brain tumor located in the cranium of beloved Senator Ted Kennedy has refueled the debate over the link to cell phone use and cancer. Senator Kennedy's diagnosis of glioma relates to a tumor that critics have long associated with cell phone use.

The allegation has been dismissed by the American Cancer Society, and various other experts. Among the dissenters is Dr. Eugene Flamm, Chairman of Neurosurgery at Montefiore Medical Center, who referred to the alleged link as defying credulity. 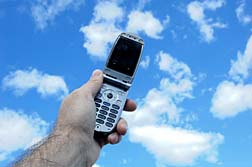 However, it is interesting to note that three prominent neurosurgeons have revealed they never hold cell phones to their ears. Dr. Vini Khurana, an associate professor of neurosurgery at the Australian National University and an outspoken critic of cellphones, uses a speakerphone. Dr. Keith Black, of Cedars-Sinai Medical Center in Los Angeles, and Dr. Sanjay Gupta, a neurosurgeon at Emory University Hospital and the likeable chief medical correspondent for CNN, both prefer to use earpieces.

All three appeared on Larry King Live last week, and stressed the importance of keeping the microwave antenna of the cell phone as far from the brain as possible.

Cell phone use, and whether or not it constitutes a health hazard, is a debate that continues to simmer, if not rage. However, it is telling when individuals who spend their livelihoods peering inside patient's heads, removing tumors and saving lives in the face of a myriad of maladies, take a personal stand. Akin to an eye surgeon who professes the safety of laser eye surgery, yet personally chooses not to go that route and sticks with the glasses, one has to wonder if such obvious personal bias might tip the tenor of the debate into a different direction.

Research is ongoing, and results are mixed. As reported in the New York Times this morning, the most complex and thorough study of all research efforts to date involve users and data encompassing 13 countries, including Canada, Israel and several nations in Europe. The study is called Interphone.

Last year the American Journal of Epidemiology (AJE) published data from Israel that showed a 58 percent higher risk of parotid gland tumors among heavy users of cellphones. A Swedish analysis of 16 studies published in Occupational and Environmental Medicine revealed a doubling of the risk for acoustic neuroma and glioma after 10 years of heavy cellphone use.

And therein lay the rub for critics who dismiss the idea that heavy cellphone use can cause cancer. While the US Food and Drug Administration (FDA) notes that three large epidemiology studies since 2000 have shown no harmful affects, the agency does admit that the average period of use for those studies was about three years, and therefore does not address long-term use.

There is also no distinguishing between casual, and heavy use.

When the cell phone was introduced, it was initially the bastion of business, and emergency communication. Both the phones, and the airtime were expensive, and users who could afford the luxury limited their use of the product, novel as it might have been.

Today is a different story. Cellphones are everywhere, and users can routinely spend hours at a time chatting with their phone figuratively glued to their head. The advent of texting has mitigated some of the risk, as children and adolescents have gravitated to text messaging as the preferred modus operandi. However, researchers are concerned not only about heavy cell phone use, but also the fact that so many kids have them now, and the devices are being used at a time in life when the brain is still developing, and the cranial bone mass is thinner, than that of an adult.

Critics also suggest that having a Bluetooth transmitter in your ear all day might not be a good idea either.

At the same time, however researchers make the point that just because medical science can't explain how it happens, doesn't necessarily infer that it doesn't happen.

More News
"What we're seeing is suggestions in epidemiological studies that have looked at people using phones for 10 or more years," says Louis Slesin, editor of Microwave News, an industry publication that tracks the research, in comments published this morning in the New York Times. "There are some very disconcerting findings that suggest a problem, although it's much too early to reach a conclusive view."

Still, in recent studies that suggest a risk, tumors tend to show up on the same side of the head that the user holds the phone to.

And three brain surgeons refuse to even do that.

As cellphones become more prevalent, perhaps even replacing the wired static telephone one day, more and more users will be facing a lifetime of exposure, whatever the risk. With rates of cancer continuing to climb, conclusively identifying whatever risk might be at play with regard to long-term cellphone use would be useful to prevent millions of potential cancer diagnosis down the road.