C. Wes Pittman is a founder and principal in Pittman and Parry, PA, a firm specializing in personal injury and consumer cases nationwide, although primarily in Florida, Georgia and Alabama. A 1976 graduate of the University of Florida's Frederick G. Levin College of Law, Pittman's practice covers a wide and varied range of cases—as we'll see below!

LAS: Can you describe the focus of your practice? 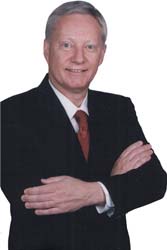 CWP: The TBF case is a national class action with five people currently named as the putative class representatives. Every single one of them has suffered injuries from taking TBF. It only takes a few days of ingestion to experience injuries. The injuries are essentially the same in every case: flu-like symptoms such as nausea and severe diarrhea, progressing to severe muscle cramps and spasms mainly in the legs, then to profound or total hair loss over a few days—talk about hair thinning!

Some of the women just won't leave the house, they're wearing hats or turbans, they won't go to church, there are kids who won't go to school because they're being ridiculed by their classmates. Then there are other lesser symptoms such as cracking and possible loss of fingernails. Some people have developed blisters in the mouth and genital area that led them to fear herpes as well.

People are scared to death, especially about possible long-term effects. They're suffering numbness in the legs and feet associated with the muscle cramps and spasms, and a number are seeing neurologists to try to figure out if there will be long-term effects. Selenium has been implicated in some serious long-term problems such as Amyotrophic Lateral Sclerosis—Lou Gehrig's Disease—due to motor neuron toxicity.

One interesting aspect of this case, and I'm not certain of the facts yet, but I have been informed by a source that the company in Louisiana that compounded the substance falsified some of its certificates of analysis, so we're certainly going to pursue discovery on that and check the accuracy of those allegations.

If it's true, we'll certainly be amending the complaint to allege that and ultimately to move for court approval to include punitive damages. We hadn't necessarily planned to do during discovery, but now that we've heard of this potential problem of falsified certificates, it's a much stronger indication that we will be amending.

LAS: What are certificates of analysis?

CWP: They certify that analysis was done either for internal quality assurance or to present to the ultimate distributor in Atlanta, which is Total Body, to certify that the product's formulation is appropriate and it's manufactured in accordance with specifications. I'm told the certificates were falsified to indicate that the product in the case was in compliance and had the normal daily allowances of the various constituents of the formula included, but that in fact the selenium content was extraordinarily high. This is what I've been informed of from a source, I don't know for certain. discovery will certainly answer that.

What's the current status of the case?

CWP: We just filed, so we're gathering information and responding to calls from a lot of people asking what doctors to see, what long-term effects might be, and so on. These are normal inquiries from people who wonder what they have and what may happen to them. We're looking to see if there are other complainants who might want to join in. Then we'll follow the normal steps taken in discovery. After that we'll seek class certification; if it's not certified after discovery, we'll pursue it as individual cases.

LAS: You're also pursuing a very dramatic case involving sexual harassment of women employees in the Florida Department of Corrections (DOC)—what's that about?

CWP: It's a bizarre case—and the state is still permitting it to go on. It's disgusting.

This case began in 2001 or 2002, when a lady came to me whose husband I had represented in a medical malpractice case. She worked as a nurse at a prison near Chipley, Florida, called Washington Correctional Institution (WCI), a state prison with an all-male population. She and a number of other nurses had gotten sick and tired of nothing being done about sexual harassment by male inmates in close management (CM) confinement—they're people who just don't do well with other prisoners and are put in special separate dormitories so they can be better managed.

They're housed in a two-story building with four wings going out from a central control room. So there are two floors of prisoners' cells spread out in four directions. The corrections officers (COs) can see everybody in the cells, which are walled rather than barred, with a door with a plexiglass window that allows the inmates to be observed.

The nurses make rounds three times a day; they could be seen from the cell windows while they were on their way over with the cart with the medical supplies, and that's when it would begin, with the prisoners yelling "I wanna do this to you, I wanna do that to you on this part of your body," etc. This continued until they entered the dorm through the sally ports, then the inmates would go crazy, masturbating directly at the nurses, yelling obscenities, and so on. As many as 90 percent of the prisoners would do this as the nurses went from door to door. This was their entertainment for the day. The COs, the sergeants, the lieutenants, the captains, the majors, all the wardens, did nothing about it. Nothing.

So this nurse came to me to ask if I could help. We had a meeting of nurses and filed a class action against the DOC in Washington County. We also learned that WCI wasn't the only place where this was happening; it was happening at a number of facilities throughout Florida—Tallahassee, Santa Rosa, Charlotte, and various others between Gainesville and Jacksonville. The story was uniformly the same. Some of the COs took care of it, but then lost interest and let the inmates get the upper hand and the inmates essentially came to regard it as an entitlement.

The COs laughed at the women, they thought it was funny, they made gender-specific statements that are not permitted under the law, and they said "Well, this is the inmates' home, they can do as they please." We sort of had the idea that this was a corrections department!

We filed the case in state court, then DOC removed it to the federal 11th Circuit Court because one aspect of the complaint included an allegation of the state being in violation of federal Title VII. Because the criteria in the 11th Circuit for filing and maintaining harassment and discrimination class actions are pretty complex are very negative toward plaintiffs, it was decertified by Judge Richard Smoak of the Northern District and we were ordered to proceed as a consolidated plaintiffs case. That's just individual cases tried together.

The first 12 consolidated cases were tried in the Northern District in January 2007, and resulted in a verdict of compensatory damages for all plaintiffs for emotional suffering. the DOC appealed, and this case was later settled.

We'll be trying the next case in the Southern District in May with 14 plaintiffs, then we'll have somewhere over 100 plaintiffs' cases to file in various parts of the state for exactly the same problem. I get calls nearly every week from people who want to join and say that it's a continuing problem—all women, nurses, doctors, some classification officers.

James Crosby came in as Secretary of DOC after Michael Moore around 2005, but he did nothing about this problem, possibly because he was alleged to have engaged in sexual misconduct himself; he left in disgrace after being charged with criminal misconduct and is in prison now. James McDonough came in in 2007, and we hoped that he would take notice, and not only make changes to protect these women and get control of his officers, but also spearhead an effort to resolve these cases.

McDonough resigned in January after about a year on the job; he said he had been charged with cleaning up DOC and thought that he'd made some inroads, but he also said that corruption was still rampant. After he left DOC, he was interviewed on CNN and lowered the boom on DOC for the rampant sexual misconduct that was still being permitted. So we had someone who saw the problem but couldn't fix it.

We're still hoping that Governor Crist will see it and correct it, but so far it's been to no avail. He may have a hands-off attitude. I think they just don't want to deal with something that's so dirty and so obscene. They don't want to dirty their hands with it. They seem to want to keep it swept it under the rug. It's a very dirty secret and they want to keep it that way.

I definitely want this fixed. We'll make our money one way or the other, but the women in these prison jobs are in a nightmare situation. Almost to a one, when they have endured this kind of treatment during the day, often for ten hours a day, six days a week, they go home and they don't want their husbands or boyfriends to touch them, they don't want to see another naked man, they've had enough. These women say that it's changed the way they look at men. A man reaching for his car keys sets off a reaction, they have nightmares, they don't want to go back to work in that place, but the state has better pay and benefits, so they keep going back.

LAS: What you've described sounds like the classic post-traumatic response to rape.

CWP: That's exactly what it is. And there may be as many as 2000 victims—it's a state problem of huge magnitude.

What I've described is called "gunning", by the way—the inmates would "gun" for the nurses. The COs and wardens knew it by that name, too. They absolutely knew what was going on.