Wayne Cohen: Flying Golf Balls Can Cost You More Than an Extra Stroke on Your Game

Lawyer and golfer Wayne Cohen readily admits to having hit a wild shot or two, that ended up on the wrong fairway, or went hurtling off in the wrong direction.

"Yes, that does happen!" he confesses. 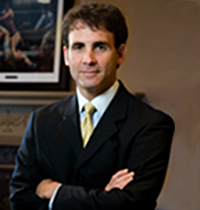 A Washington, DC personal injury lawyer, from the firm Cohen and Cohen P.C., he says it was about six years ago that the first person walked into his office and asked Cohen to represent him in a golf course injury case. "He was struck in the eye by a wild ball," 41-year-old Cohen recalls.

Since then, golf course cases have become a kind of sub specialty for his firm.

Those little white balls, with the density of a rock, traveling through the air at a rate of 100 miles an hour can and do injure thousands of people on courses throughout the U.S. every year. Estimates are that up to 20,000 people a year are hurt playing golf.

Cohen says he had one case where a client crouched down in a golf cart to avoid a wayward drive, but the ball actually pierced the Plexiglas and struck the golfer.

"Typically, it is golfers that are new to the game that are involved in these cases, and typically they are injuries to the eye or head that the golfer has sustained." says Cohen. Usually the cases settle out of court, and records are sealed to protect the reputation of the golf course, according to Cohen.

The golf course may look placid and serene, but it can be a dangerous place, and although golfers do assume some risk when they step on to a course, there are exceptions.

"In order to be successful in a golf case you have to prove that there is a problem with the way the course is set up," says Cohen. "It may be that there is not a sign warning people that a shot may be coming in your direction, there may be no bell on the driving range, or it could be the position of the driving range, or there may be no natural barriers like trees between the holes."

These are the kinds of situations that could cause accidents and that the course could be held accountable for.

LAS: "Can Individual golfers be sued for those bad shots?"

WC: "That's a great question, the reality is that golfers make bad shots, whether you are Tiger Woods or the average golfer with a 25 handicap, they make errant shots. That would not rise to the level of a lawsuit. On the other hand, if you are waiting that the T and there is someone 200 yards a head of you, and you think, oh I am not likely to hit him, and you do, you have a problem."

LAS: "So golfers should be patient, and wait their turn?"

LAS: "Are individuals insured for this kind of situation?"

WC: "I have not taken a case like this, but sometime their homeowners insurance would cover things like that."

A well-known and highly regarded attorney, Cohen has won millions of dollars in verdicts for his clients in the area of personal injury due to medical mistakes, birth injury, product defect, automobile collision, and slip and fall cases. In addition to playing golf, Cohen has been an amateur boxer since high school and still likes to box in his spare time.

Wayne Cohen is the founder and managing partner of Cohen & Cohen P.C. in Washington DC. He is a graduate of the University of Michigan (Bachelor of Science 1988) and the University of Miami School of Law (1991). He is also an Associate Professional Lecturer of Law at George Washington University, where he currently teaches trial skills.