Want a good fight? A good battle for glory? You're in for one on the gridiron this Sunday for sure - but that's just the one you'll tune into on CBS. What you won't see streaming live across every sports bar and in every family room across America are the behind-the-scenes battles being fought by folks who don't need to don Riddell gear to do their dirty work. No, they file lawsuits instead. 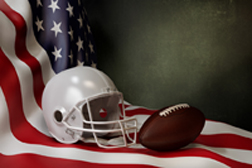 It's the American way. And if nothing garners the attention of American fandom like the Super Bowl, nothing garners aggravation, and hence litigation, like a pissed off football fan or NFL worker. So, while the 82,566 frigid seats at MetLife Stadium await the raging chants of “Defense! Defense!”, there are those who’ve already filed their offensive move, hoping for a victory in court. And given that this is the Super Bowl we’re talking about - the marketing bonanza that commands millions of dollars in ad revenue and billions for the NFL - there’s undoubtedly money on the table to be had, and most of these plaintiffs are well aware of that little tidbit...

And it has nothing to do with NFL concussions. Rather, these lawsuits are about guarding one’s turf - including, as it turns out, the turf the lads will be playing on. And the ticket prices. And the cheerleaders. And the teams that are taking part in the first place. Some of the lawsuits will give pause to ponder the unfairness. Others will leave you wondering why a lawsuit is even necessary. Yet another will leave you shaking your head in wonderment.

But in the end, all cases speak to the American freedoms we all enjoy, and the capacity as entrenched in the American constitution to protect our democratic rights.

NFL Cheerleader Lawsuit: Putting Out and Not Getting Any?

First, the cheerleaders - something football fans may be tuning in to see even more than the game itself. And yes, most cheerleaders will tell you they do it more for the glamour than the money - especially if they’re one of the lucky ones to have their baby blues and provocative moves showcased to a worldwide audience.

But there’s a limit to a cheerleader’s generosity - and those limits have been put to the test in a lawsuit filed by a disgruntled cheerleader in California against the Oakland Raiders. The allegation is that the team violates several California statutes and labor codes by underpaying cheerleaders.

According to an Associated Press report, allegations include cheerleaders not being paid until the end of the football season, not paid for all hours worked, and pay lost through fines incurred for improper uniforms or being late for practice. Costs cheerleaders incur on their own, including - or so it is alleged - hair, makeup and eyelashes - can reduce a cheerleader’s actual wage to less than five dollars per hour.

Factor in missed meals, rest periods and overtime pay, and the plaintiffs allege a cheerleader can potentially work an entire Oakland Raiders season and receive no monetary compensation at all.

Then there are the tickets, that used to cost $12 a piece for Super Bowl One (SB 1) in 1967. And that was for the best seats in the house. Contrast that to the $2,600 price tag for a premium seat this year at MetLife Stadium in East Rutherford. Similar tickets at last year’s event in New Orleans were $1,250 each.

New Brunswick resident Josh Finkleman is madder than hell and he’s not going to take it anymore. His lawsuit, filed two weeks ago in federal court in Newark, contends the NFL set aside just one percent of available tickets for the general public to purchase at face value. Finkleman says that means most fans have no choice but to buy their tickets on the secondary market, at outrageously inflated process. Finkelman, who didn’t say if he was going to the Super Bowl, claims in his lawsuit that the NFL is in violation of the New Jersey Consumer Fraud Act. And he is suing the bastards…

Next is a lawsuit filed by Taylor Turf, which feels it needs to protect its turf - literally - following nonpayment (thus far) of the lion’s share of a bill to install a playing surface at MetLife Stadium worthy of a Super Bowl. According to the Associated Press, Taylor Turf entered into an agreement with the NFL to install the artificial playing surface for an agreed sum of $417,000 according to the plaintiffs. Taylor Turf says it was paid $125,000 early in the process, but has yet to receive the balance of $292,000.

Assuming the turf company, currently embroiled in a turf war with the NFL, is indeed owed more than a quarter million…also assuming that the NFL’s greed has inflated ticket prices knowing that corporate American can well afford them at the expense of Joe Average Fan…and also assuming that allegations over long hours and low pay suffered by Oakland Raiders cheerleaders are true and can be substantiated - then lawsuits are both prudent and fair in the continued pursuit of rights and freedoms we all enjoy as Americans.

Even the right for an inmate - lacking, perhaps, freedom of movement but retaining constitutional freedom to litigate - to sue the NFL because he disagrees with the matchup in the Super Bowl. Yes, something to be celebrated, at least to a point.

To that end, Daniel L. Spuck, of Mercer, Pennsylvania, indeed, has a point. He contends from his jail cell, where he is doing time for murder, that had NFL referees not missed a penalty call during Week 17 of regular play, a field goal missed on the first attempt might have had the opportunity to be attempted a second time, the success of which might have changed the outcome of the game and the fate of the Super Bowl. Rather than the San Diego Chargers advancing to the post season, it might have been the Pittsburgh Steelers moving forward as the final wild card team.

No matter. San Diego didn’t make it anyway. But who knows? And that’s Daniel L. Spuck’s point. A missed call, an error about which the NFL readily admits, might have changed fate. And on that point, Daniel L. Spuck from his penitentiary cell filed a motion against the NFL to US District Court for the Western District of Pennsylvania. It is important to note that Daniel L. Spuck filed his motion TO the court and not IN court, as we assume he wasn’t granted a day pass to appear in court himself.

Perhaps the Super Bowl will be halted before it can even begin at the behest of Daniel L. Spuck, leaving us all to gaze into our coffee tables and try to figure out what to do with all those chicken wings and nachos. Perhaps the turf company will sneak in and roll up the playing surface at half time while we’re all focused on Bruno Mars. Perhaps the Super Bowl cheerleaders, in solidarity with their counterparts in California, will suddenly appear in coveralls instead - or not appear at all, as will the fans who choose not to re-mortgage their homes in exchange for a couple of hours of enjoyment at a football game in a New Jersey stadium, and stay home - leaving the cameras as their only cutaway option the benches where the players are sitting, scratching themselves, in between the respective coaches wandering back and forth in front of their charges, looking very official and hoping they get chosen for the traditional Gatorade bath.

We also hope there are no concussions in the game Sunday. We would understand, however, if the NFL itself feels somewhat concussed from all the legal blows coming at it from all sides. Legal volleys which, save for one in particular, make complete sense and uphold the rights and freedom for Americans to litigate when they are wronged.

Click to learn more about LawyersandSettlements.com
LawyersandSettlements.com is an online news and information site for the general public and legal community. As a legal news resource, we have emerged as an independent & trusted voice. We provide detailed and quality information on various lawsuits filed including Personal Injury Cases, Business Frauds, and Civil & Human Rights Cases.