Deal or No Deal? Randall Kiser Can Help You Decide

What Randall Kiser would actually say, is that he develops "statistical models" and "data bases" that measure key variables that can be used as a guide for attorneys, litigants and others.

And, then using percentages and probabilities, individuals can make accurate assessments about whether it is better to sue the pants off their antagonist, or whether is better to have (as they say on the Sopranos) a "little sit down."

Randall Kiser is a rather modest man. He describes himself and his colleagues as "bean counters", and he thinks that his business affairs are "not that interesting." Actually, what Kiser has to say is quite fascinating. 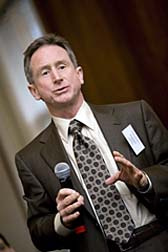 If you watch the television news, it would appear that most of the world goes about the day creating havoc. Randall Kiser on the other hand, a trained decision analyst, helps clients involved in litigation matters, make good and profitable choices

Kiser does not offer them advice; he just works out the probability of success based on certain key variables. "I don't have an opinion," says Kiser "I just tell people the probable outcomes."

It is a strictly by the numbers game for Kiser. When it comes to the success or failure of various litigation strategies, Kiser has developed a list of 20 variables, focusing on two key categories.

The first category he calls the "Actor Variables". Using some sophisticated software, Kiser plugs in the facts. "We look at the gender of the party involved, or whether it is a corporation or an individual," Kiser says. "We also look at the attorneys, whether they are part of a team of attorneys, or whether they are male or female and how long have they been in practice."

The next thing Kiser looks at is what he calls the "context variables." Kiser calmly reels off the list of possible situations. "We want to know if there is insurance involved, is it jury trial," he says. "We look at the underlying wrong doing, whether or not it is an act of omission or commission."

When Kiser starts laying it out, you can understand how these kinds of things definitely play into litigation strategies. It seems rather obvious in a way, but you have be a trained decision analyst really to get to the heart of the numbers.

Kiser and a colleague reviewed some 2,054 cases that went to trial between 2002 and 2005. Their study will be published in the September issue of the Journal of Empirical Legal Studies.

However, here are a few appetizers from the as yet, unpublished research.

All the cases Kiser looked at were cases where a settlement offer had been made, but the case subsequently went to trial. The idea was simply to compare the settlement offer, with the trial result and see which side benefitted from the decision.

Simply put, were the parties right to "hold"--or were they right to "draw another card."

Here is another important point from Kiser's work. Over the last 40 years, fewer cases go to the trial stage. But, according to Kiser's numbers, when they do go to trial, it is often a wrong decision.

The reality is that 80 to 92 percent of litigation is actually settled before the trial stage. Still, Kiser's research will likely give lawyers and clients a moment's pause when considering whether to take what's on the table, or go rooting around in the cupboard for more.

Randall Kiser is a non-practicing attorney. He is the principal analyst at DecisionSet in Palo Alto, California. His present research interests are professional expertise, problem solving and system failures.

Posted by
Martin Holleran
on March 12, 2016
Since the publication of "Let's Not Make a Deal" has Mr. Kiser supplemented in any Law Book or contribution any article to a Law Monthly, public media or Univ. Law Journal or any other source.additional information?

Also when will the books upon which Mr. Kiser is presently working be published?