San Diego, CA (September 26, 2013): San Diego attorney James Frantz knows all about fires. Recently he spoke with LawyersandSettlements.com to share some of that knowledge, along with tips on how homeowners can best prepare for filing a wildfire lawsuit or a fire damage claim. 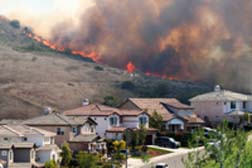 Since the devastating California wildfires of 2007, Frantz has spent the last six years litigating on behalf of hundreds of homeowners and businesses affected by the fires. Frantz shared with LawyersandSettlements.com that the wildfire lawsuits have involved damages into the billions* that were alleged to have been the result of improperly-maintained power lines controlled by San Diego Gas & Electric.

That was 2007. But 2007 doesn’t hold a candle to the wildfire season just behind us. In August there were so many wildfires blazing across the country that The National Interagency Fire Center (NIFC) invoked a Preparedness Level 5**. According to the NIFC, a so-called ‘PL-5’ suggests a situation where firefighting agencies across the country have been pushed to the limit and teeter on the brink of becoming overwhelmed***.

It’s the fifth time in ten years the NIFC has invoked a PL-5†.

What does this suggest to home and property owners? “Be ready,” says Frantz. "While fire loss is usually covered by most insurance policies, victims who have suffered a fire loss are often surprised to discover they are under-insured. Make sure you are insured for 100 percent of the value of your property,” says Frantz, who represents some 300 business and property owners stemming from the wildfires of 2007. “And take photos, videotape your house, your valuables, your car and everything else. It’s hard to prove a negative and the receipts will likely be ashes.”

According to an Associated Press report from October, 2007††, the devastating wildfires of that year burned close to 500,000 acres of land and destroyed 1,500 homes causing the evacuation of close to 500,000 people. For anyone under-insured following the devastating 2007 fire season, pursuing the difference in damages from a third party--such as the owner of power lines thought to trigger the blaze--is a prudent step. But it can take years--and many homeowners who file fire damage claims are found to be deficient in their documentation.

Frantz notes it is important for property owners to avoid delaying a fire loss claim with an insurer. Get right on it, and keep a detailed account of all conversations. Take photographs of the damage, for comparison to previous photographic evidence, via stills and video, of your property and contents before the fire, stored in a safe place such as a safety deposit box off site. It is also suggested that property owners consider covering the area with tarpaulins to prevent further damage, and to preserve the fire scene once the ground has cooled.

Frantz goes on to say that even with sound photographic evidence, it’s a good idea to document everything damaged in the fire. Make a list of everything known to have been lost, no matter how trivial.

Should the cause of a wildfire be traced to a specific entity, such as a power company, Brian Heffernan with ELL Law in Los Angeles stresses the importance of hiring the right lawyer in order to pursue a wildfire lawsuit. “And, it is important to find out the cause of the fire. I find that people are usually very interested in that and they know the cause by the time they come to see me,” he says.

According to the NIFC in Boise, Idaho conditions have improved across the US to a PL-2†††. However, the risk of wildfires remains. As such, Frantz stresses it is important for homeowners to ensure they are adequately prepared.

LawyersandSettlements.com provides comprehensive legal news and critical information for those affected by once-in-a-lifetime situations involving medical device lawsuits, personal injury, defective products, California Overtime and labor issues or a host of others. Readers seeking legal help can request it by completing a form which is distributed to attorneys specializing in these cases. Trial attorneys utilize the site to keep abreast of hot legal issues and settlements as well as connect with potential clients. Web: https://www.LawyersandSettlements.com".

Online Legal Media owns and operates websites providing information for the general public and the legal community. LawyersandSettlements.com, founded in 2001, is an online legal news publication with over 2.1 million visitors annually and hundreds of thousands of requests for attorney help from its readership.OnlineLegalMarketing.com serves as a portal for trial attorneys to network and market their firms to other legal professionals. HealthEffectsOfAsbestos.com offers resources for those suffering from asbestos exposure and mesothelioma. Online Legal Media is based in Santa Cruz, California.

Click to learn more about LawyersandSettlements.com
LawyersandSettlements.com is an online news and information site for the general public and legal community. As a legal news resource, we have emerged as an independent & trusted voice. We provide detailed and quality information on various lawsuits filed including Personal Injury Cases, Environment Cases, and Insurance Cases.