The city of New Orleans has filed a $77 billion claim against the United States Army Corps of Engineers seeking compensation for losses incurred after failed levees resulted in flooding of the city. 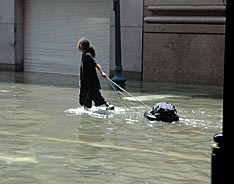 In addition to the city's lawsuit, at least 34,500 other claims had also arrived in the New Orleans district office. In many cases, people are claiming that their homes survived Hurricane Katrina but were damaged in the flooding that followed the hurricane.

According to an article in the Los Angeles Times, the New Orleans electrical utility, Entergy New Orleans, which went bankrupt after Hurricane Katrina, has claimed $655 million, while New Orleans Sewerage and Water is seeking $460 million.

The New Orleans claim was filed on March 1st, which under the Federal Tort Act was the last day claims could be filed against the Army Corps. Claims must be filed before any lawsuits can be brought. The Corps now has six months in which do decide whether to accept, settle, or reject claims brought against it. After that point claimants will be able to sue in order to recover damages.

Hurricane Katrina hit New Orleans on August 29, 2005. In the aftermath many floodwalls collapsed, allowing flooding over most of New Orleans and causing death and massive destruction. Those people who did survive have had their lives uprooted over the past year-and-a-half. An editorial at usatoday.com reports that almost half of New Orleans' population prior to Katrina, which was around 455,000, has not returned to the city, and more are thinking of leaving.

If you or a loved one has suffered physical or psychological injury or financial loss as a result of flood damage caused by Hurricane Katrina, please contact a [New Orleans Failed Levee] lawyer who will evaluate your claim at no charge.
Request Legal Help Now

Posted by
Royinn Stewart
on December 27, 2010
We filed a claim. When will see any money from it?