Robert Heston senior won his lawsuit against Taser International, but at a terrible cost. "I have a picture of my son under the Christmas tree and I miss him," says Mr. Heston, whose son was Tasered to death in 2005. "It is hard on all of us this time of year—we are a close family. You always think you are going first but when the kids go it takes a toll on you." And Mr. Heston has been in the hospital with heart problems on several occasions--he thinks it stems from anxiety over his son's death. 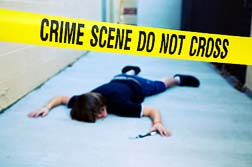 Mr. Heston remembers vividly that horrific day when his son—also named Robert—was Tasered repeatedly; Mr. Heston says his son was tasered about 30 times. "I guess the police kept doing it because they thought they didn't have full control over Robert—they couldn't handcuff him. But Robert couldn't put his hands up because he couldn't move." Mr. Heston explains that the police officers tried to pry Robert's hands from under his torso to handcuff him but he was paralyzed—so they Tasered him some more!

"The cops got off scott free," says Mr. Heston. "We lost the case against the cops but won against Taser. Policies need to be changed about Tasers; when they first came out the police had no idea what they could do to people because it was put on the market by Taser International as non-lethal, but we all know that isn't true now, after the fact."

"Losing Robert was devastating," says Mr. Heston's son-in-law, Kirk Kasner. "Since Robert's death I have done a fair amount of research and in my opinion, most law enforcement is not trained sufficiently—police officers get far more firearms training than they do Taser training. They have a preconceived notion the Taser is safe; they think Tasering someone repeatedly is harmless."

Kasner believes Taser International has downplayed the hazards and he questions their studies, mainly because a new product should be tested to failure—i.e., under what circumstances will it fail and how does it fail, not by testing a product to prove it is safe, as the weapons company has done.

Kasner says the case against Taser International was successful because the Heston family had exceptionally competent counsel—attorneys John Burton and Peter Williamson--and the jury pool was another reason. The San Jose area is a technology hub and the jurors had a good grasp of the technology—initially there were 3 engineers. A lot of the case concerned the product liability issues. "When it came right down to it, Taser had not been forthcoming with the true safety concerns of the weapon and they downplayed it to the police officers," Kasner explains. "And I believe if law enforcement had greater respect for the equipment and were more conservative with their applications, there would be fewer fatalities."

At the same time, Kasner believes Tasers do have a place within law enforcement; in the right setting there is potential. "But police officers are trained based on Taser's information and if that information is false, the snowball runs downhill," he says. "Taser is the root of training and policy and the police departments use their policies."

But their policies left the company open on liability issues and that is the main reason why the Heston family won the case.

"Taser claimed you could shoot each other with a Taser all day long but my brother-in-law died before the last discharge from the Taser was cycled (started and stopped)," says Kasner. "The trigger was pulled, my brother-in-law was shot with another 50,000 volts and it is possible, given that 3 officers were firing, that he was shot with 150,000 volts at the same time. Our lawyers have a chart that shows the cycling of the weapons which clearly shows the minute the first weapon was discharged and the last minute, and the sequence in the timeline of the event.

I can't find any fault in the jury, even though they acquitted the police officers; they stepped in and represented the community. But they found Taser International guilty.

What bothered me most throughout the proceedings was that there has been more response form other countries on this Taser issue than there has been from the US and our legislature. Look at the Canadian media—they are pursuing Taser aggressively and there are public inquiries. In the US, I think Taser has sold its story so well that we believe it. And many Americans see people who are Tasered to death as addicts and drunks—they are invisible to society. The only people who give a damn are the family members.

Taser has developed this Teflon image that nothing bad is going to stick to them—they sue coroners and medical examiners, they sue researchers that make findings contrary to their claims; they do personal litigation against individuals.

If not for my father-in-law pursuing this lawsuit, eventually somebody else would beat Taser. All he wants is justice. Nobody apologized from what happened that day, except at the end of the court case. The police officers gave condolences, but Taser said 'obviously we disagree with the ruling'…"