A former Pennsylvania school administrator filed a lawsuit against her former employer, alleging racial discrimination as the primary basis of her termination. 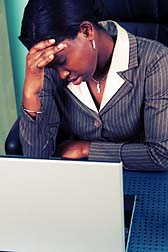 LaToya Monroe was employed until May 2008 as the human relations director for the Easton Area School District (EASD). She was relieved of her duties two weeks after receiving a favorable review.

On January 6 she filed a lawsuit against the school district. Monroe alleges that her tenure with the school district was terminated over her discovery of a "pervasive pattern of race discrimination in EASD's hiring and employment practices."

The Morning Call, a newspaper serving the Allentown area, reported on January 8 that Monroe's efforts to bring racial inequalities within the district to the attention of her superiors at the school board and other administrators were ignored. At one point the plaintiff discovered the existence of a so-called "Minorities List" from which job applicants from visible minorities were given what was referred to as "courtesy interviews."

More PENNSYLVANIA EMPLOYMENT LAW News
Monroe made attempts to persuade her superiors to bring more black teachers into the district. However, she claims that she was ignored and that no one from the list was ever hired. As the only black administrator in the school district, the plaintiff says she was treated differently from her white counterparts and earned $14,000 less than originally promised.

At one point the plaintiff gave a deposition in support of a discrimination lawsuit against the district filed by a black security officer.

The plaintiff says she was fired from her contract position after refusing to hire the daughter of the school board vice president for a teaching position.

Monroe filed a complaint with the Pennsylvania Human Relations Commission and the Equal Employment Opportunity Commission. The Commission, in turn, notified Monroe of her right to sue in October.

There is no word as to what the plaintiff is seeking in terms of damages in her Pennsylvania employment lawsuit. The Morning Call was unsuccessful in its attempts to reach the Pennsylvania attorney representing the EASD.

If you have suffered losses in this case, please send your complaint to a lawyer who will review your possible [Pennsylvania Employment Law Lawsuit] at no cost or obligation.
Request Legal Help Now