Assault with a Deadly Needle

Personal Injury lawyer Richard Gurfein makes an important and topical observation about vaccinating children against H1N1. Before sticking a needle in a child's arm, he says, it would be very prudent for school officials to secure "written permission" from the parents. "I have grandchildren, and if anybody tries to vaccinate them without consent and I would go ballistic," says Gurfein. Vaccinating a child without parental permission constitutes assault and battery that could lead to a personal injury lawsuit. 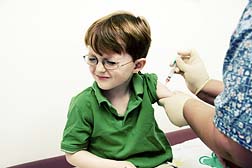 Although Gurfein personally believes the H1N1 immunization is safe and appropriate, he points to some important legal considerations for children's vaccination programs currently being carried out at schools across the country.

"The news media is filled with controversy about whether to vaccinate or not vaccinate," says Gurfein. "Parents need the opportunity to have a reasoned and logical discussion with their healthcare provider to make a decision."

In New York City, where Gurfein practices, it is estimated that as many as half of the schoolchildren have been vaccinated without signed consent forms. A child with epilepsy was recently vaccinated without parental consent and suffered an adverse reaction that resulted in hospitalization.

However, even if a child does not react negatively to the shot, Gurfein notes that the law still considers the injection a battery upon a child. "It is a battery by the mere fact of the unlawful touching," says Gurfein.

Although school and organizations have an in loco parentis (in place of the parent) responsibility in case of an emergency, Gurfein says that vaccinations do not require such immediate action. "There is no emergency that says a child needs to be vaccinated at this very instant," he says.

"If the school felt they didn't want to take the chance of children being in school unvaccinated, they have the option to restrict the child's access to the school," adds Gurfein.

"They could say to a parent, 'We feel so strongly about this that either you vaccinate your child or you home school your child, because we will not allow unvaccinated children in our school.'"

Richard Gurfein is a name partner the New York City law firm of Gurfein Douglas. Gurfein is the past president of the New York State Trial Lawyers Association. Gurfein writes extensively on legal issues and believes in educating the public about legal matters. He has been practicing law for 30 years in the state of New York.