Just weeks after it was linked to peanut butter salmonella and one of the largest food recalls in US history—and days after a second plant in Texas was also shut down--Peanut Corporation of America (PCA) has filed for liquidation under Chapter 7 in Virginia, where PCA has its head office. 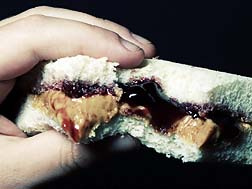 Meanwhile, the fallout continues to rise. The death toll is now said to be 9, according to the Centers for Disease Control and Prevention (CDC) in Atlanta. A total of 637 illnesses are thought to be tied to the peanut butter salmonella outbreak, and more than 2000 products have been recalled.

Those products, manufactured by other companies (some of them marquee names) are thought to contain peanuts, peanut butter or peanut paste from PCA.

The owner of PCA, together with the plant manager at the now-shuttered production facility in Blakely, Georgia appeared late this week at Congressional Oversight hearings, but refused to testify. Both men pleaded The Fifth Amendment. It was reported that a hearings participant asked the two men if they would feel comfortable eating some samples of PCA-produced peanut butter that had been supplied to the hearing. The two men were reportedly shaken at the invitation.

PCA filed for Chapter 7 bankruptcy protection the next day.

The peanut butter salmonella recall story has taken on two different themes since the story first came to light—the failure of a manufacturer to maintain proper conditions, and practices conducive for managing safety protocols at their facilities—and that of inspectors, who cleared plants that contained obvious problems.

This latest recall has left consumer advocates screaming at Congress for change. The Obama Administration has promised reform of the country's food safety net which, bedraggled with large holes, is in desperate need of repair.

This week attention focused on a second PCA facility in Plainview, Texas after the company's Blakely plant was closed down after inspectors found a leak in the roof, mold and roaches.

While safety advocates have been quick to criticize PCA for the deplorable condition at two of its three facilities (a third plant produced no trace of salmonella), critics have pointed to noticeable failings in regulatory oversight.

With Americans starting to get sick in late summer, critics of the US food industry oversight system claim that the onset of what has now become one of the largest food recalls in the nation's history, actually began before Labor Day…but the recall didn't happen until almost Inauguration Day.

Specifically, it appears as if the outbreak began in Minnesota, and State health officials there did the groundwork that eventually traced the salmonella to peanut butter and, specifically, to the Peanut Corporation of America. The health department there attempted to enlist the help of the US Food and Drug Administration (FDA), but observers complained that state, and federal officials could not agree.

By November, according to a CNN investigative report, the CDC in Atlanta was studying cultures, but was still not ready to conclusively identify a source months after state health officials in Minnesota had already suspected peanut butter from PCA.

A spokesperson for the CDC said the problem is a disconnect between federal regulators, and 50 states that all have their own protocols, policies and budgets.

Standards are also different. It was revealed that the last time the FDA had personally inspected the Blakely, facility prior to the recall last month, was back in 2001. Since then, it had relied upon state health inspectors to do the work.

It has been reported that state inspection reports were lenient, and there was little follow-up due to lack of funding, staff and a huge portfolio of production plants, and territories for each inspector.

In Texas, an inspector who had certified the PCA Plainview plant as qualified for organic production was fired by the Texas Department of Agriculture. That certification, for which the inspector claimed the company had provided needed documentation, came in November of 2005.

It wasn't until after the recall was announced that officials learned the plant did not have a valid state health certificate, and that the inspector had certified the plant using incomplete information.

Meantime, in a telling example of what is wrong with the food oversight system, PCA had reportedly hired a private company to inspect its facilities, and were told that their plants were 'exemplary.' Given current regulations that put the onus on food manufacturers to report problems to regulators, and not the other way around, it's little wonder regulators had to accept PCA at its word.

Now that PCA is filing for Chapter 7 bankruptcy protection, the question remains from whom plaintiffs can pursue damages.

Perhaps, state health inspectors, the FDA, and the US government itself, for allowing such a convoluted system to remain in place.