"I want to share our Paxil story with you," says Carly Connors, "because our daughter has had to fight every day of her life since she was born and no little kid should have to do that." 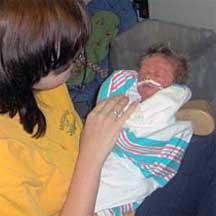 I was prescribed Paxil in July 2004 for depression and anxiety attacks," says 22 year-old Carly (not her real name pending a lawsuit). "That September I found out I was pregnant and my husband and I were very happy, especially because it was our only planned one (we have four kids).

In October we went to our first obstetric appointment and at that time I asked the doctor if Paxil was OK to take while I was pregnant. He pulled out the big blue pharmacology book and said that the only problem we could possibly have would be that the baby would be born with a low birth weight. All my other kids were 10 lbs so it didn't concern me - small would be great.

I took Paxil throughout my pregnancy.

My pregnancy was uneventful but on the first day of week 36 I went into labor with Josie. Although the doctors tried to stop my labor, they said she would be fine. When she was born, Josie never cried; she immediately went into respiratory distress and was incubated and put on a ventilator. That same afternoon she was transferred to the neo-natal intensive care unit (NICU) at Sacred Heart Hospital in Pensacola, Florida - about 15 miles from the hospital where she was born, and where I was. It was terrifying. I stayed in the hospital that night and went to Sacred Heart the next morning to stay with her. She was so small. Josie wasn't weaned off oxygen for more than two weeks. Her next problem was eating. She couldn't eat by mouth and instead had a tube down her nose because she got too tired with a bottle.

When she was just over three weeks old, an ultrasound showed holes in her heart and her two arteries, the aorta and pulmonary, were both narrowed. During this time I was pumping breast milk for her - and I was still on Paxil. I didn't know it but she was addicted to Paxil.

At my own discretion I stopped taking Paxil because I was unable to feel any emotion - I couldn't cry the whole time this was going on. Nobody said anything to me about taking this drug or my mental state.

When I stopped taking Paxil it also caused Josie to have withdrawal symptoms - she had moments where she stopped breathing and her heart rate dropped - her poor little body couldn't handle withdrawals from the drug too well.

Josie never did learn to drink from a bottle. Two months after she was in NICU we decided to have a tube inserted into her stomach so she could come home.

She has a tough road to travel. At 17 months, Josie has just learned to roll over. She has very low muscle tone and they recently found a leak in one of her heart valves. Although it isn't causing a problem yet, her problems are evolving as time goes on and I am very concerned. Right now, as I speak to you, she is in the hospital with mini-seizures. My husband is with her. In the past 10 days she has only been awake for one hour a day.

Right now we don't know what the future holds for Josie. We don't know yet how much the seizures are affecting her brain. We do know she is very far behind in development.

My husband first found out about the dangers of Paxil from a CNN report in October 2005. Then we looked on the Internet and we were furious. And I felt very guilty - this is very hard to deal with. I know it isn't my fault but as a mother, you are supposed to protect your child from everything.

More News
It took my lawyer (who my husband found from lawyersandsettlements.com -- thankyou!) several months to get the medical records from my doctor. When I originally requested my records from his office I was only sent two blood test results done during my early pregnancy - one for gestational diabetes and the other for alpha-fetal protein. But he was at the hospital when I delivered Josie and nothing I received from his office indicated that he was even there. My lawyer finally got the necessary information to pursue a lawsuit against Paxil.

This is what I have to say to [GlaxoSmithKline] the makers of Paxil: I think it very sad that drugs like this are approved and we are told they are harmless; it is sad to give Paxil to women when they are having problems in their life and told there is no evidence that Paxil is harmful to babies. You sell the drugs to us, but when babies are born with these side effects, with heart problems and God knows what else, nobody wants to take responsibility for what happened."