Over the past few years, LawyersandSettlements.com has interviewed dozens of women who took Paxil during their pregnancy and whose babies were born with birth defects. During these interviews, many women told us that their children -- usually about age three and upwards -- were also diagnosed with autism.

Mothers reported that some children are high-functioning with mild autism (HFA), while others have been diagnosed with Asperger's syndrome (AS, also known as Asperger Disorder), which is very similar to HFA. AS can exhibit a variety of characteristics and the disorder can range from mild to severe. 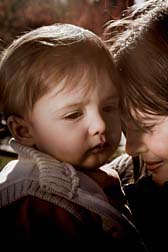 Haltom City, Texas: In the case of Sue Brown's daughter Alice, AS is severe. Sue took Paxil throughout her entire pregnancy; Alice was also born with a hole in her heart.

"My daughter had two heart surgeries and I thought we were out of the woods. But around three months of age she started to get developmentally weak. She started to curl up her hands, wobbled her head, and couldn't hold it up. Her head fell straight back as if there was no strength in her neck," says Sue.

"The doctor thought Alice had neurological problems. The neurologist said she had spinal muscular atrophy but blood tests didn't bear out the diagnosis. She appeared to be developing everything else normally but by two years old, she seemed depressed and had panic attacks. She got so upset that I would almost have to smother her with my body to calm her down. She got so worked up at little things like me telling her 'No'. And if I scolded her about anything it was devastating.

She would go outside and sing a sad song -- very dramatic -- and cry at the drop of a hat. By the time she reached kindergarten, behavior problems interfered with school and learning. I felt like it was my fault, that I wasn't a good mother. By grade one she was finally diagnosed with Asperger Syndrome.

She is now 10 and academically, she is at 1st grade level. She has to be in a special class (we can't afford a special school) and she had to repeat 2nd grade. She has friends but it is hard to keep them. When she loses a friend, she is completely devastated. She loves everybody and is very artistic -- I say God gave her this gift. Unfortunately, her siblings don't understand so it is hard for her to get along with her brothers and sisters... It has been a real hardship and I just want to wrap her in bubble wrap and protect her from the world...

Lindsay Ontario: Sherry S. only took Paxil for the first two months of her pregnancy. Her doctor told her to stop taking Paxil when Sherry told him she was pregnant. Still, the damage was done. Her daughter Melanie was born three weeks premature, and not breathing. She had two holes in her heart and suffered a stroke. At seven, she is just now learning to form words.

"She has these little ticks," says Sherry. "Before she tries to say anything, she will turn in circles and she clears her throat, over and over. Melanie is so different from my other three kids; she throws temper tantrums that can blow the roof off the house -- in seconds." And just like Sue Brown, Sherry didn't take Paxil when she was pregnant with her other four kids -- only with Alice.

Metuchen, NJ: Arlene's four-year-old son Wesley was diagnosed with high-functioning autism. "I took Paxil throughout my entire pregnancy with him," says Arlene. "He has sensory problems, speech delay and hypotonia but we are luckier than others because he will most likely be able to function normally in society, even though his way of seeing things will always be different from you and me. Wesley goes to a special school and he gets excellent speech and physical therapy; we are also lucky to be able to afford treatment."

Wisconsin: "I took Paxil from the second trimester on but it was a low dose," says Tammy F. "Everything seemed fine when Owen was born but around age three, he started having social difficulties. We took him to a psychiatrist and he was diagnosed with AS. Owen is now six and he is in special education. I also have a two-year-old son and he is fine; I didn't take Paxil during my pregnancy with him.

When I took Paxil, it was a fairly new drug and I don't think anybody really knew the risks. Since then, we know a lot more about it.

It seems likely that Paxil could cause autism and it does seem so pervasive; maybe biological factors such as AS can be triggered by a chemical.

More News
One thing I want to add is this: a lot of people are dealing with autism and we are all here to help each other -- mainly thanks to the Internet and an online community. We are not alone -- and it will be more than interesting to find out how many women who took Paxil during their pregnancy have autistic children..."

The Centers for Disease Control and Prevention released a study February 8, 2007 confirming that about one in 160 children -- higher than the one-in-200 estimate from the 1980s -- develops autism or a related disorder like Asperger's Syndrome by the age of 8. Diagnosis is typically around the age of three.

This study infers that approximately 560,000 Americans age 21 or under suffer with some degree of autism.

Researchers say that both genetic variation and developmental factors combine to cause the disorders, but little more is known than that. One thing is known for sure: these disorders are affecting way too many children.