Paxil Birth Defects: Mothers Wonder What They Did Wrong

Stacy U. had been taking Paxil for about three years to help relieve her panic attacks when she found out she was pregnant. She took Paxil for the first few months of her pregnancy but stopped taking it when her doctor decided that Paxil might be too risky for the unborn baby.

Because of another problem, blood clots in her uterus, Stacy was told to stay off work for the remainder of her pregnancy. She says she was told the baby was fine and she saw doctors weekly to ensure everything was okay.

Sixteen weeks into the pregnancy, Stacy went in for her routine exam. At this point the blood clots had healed and at the last appointment she had been told that her baby's heart sounded fine. However, this time the ultrasound took a long time. Eventually, the nurse stopped what she was doing and went over to a phone to make a call. Stacy said she asked to know what was going on, which is when she was given the devastating news: The nurse could not find the baby's heartbeat.

Stacy asked the nurse to try again, but still no heartbeat was found. Stacy was then rushed next door to meet with her doctor, but he could also not find a heartbeat. Her baby had died. 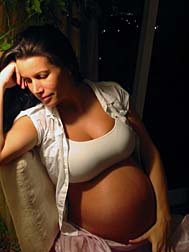 Stacy was sent to the hospital the next day for a medical procedure to deliver the baby. "I don't really remember a lot about it, but I know that night when I went home I cried a lot," Stacy says. "The next day, I kept telling my husband we should get a second opinion, but he said we had to go to the hospital."

More News
Approximately four weeks after the ultrasound, Stacy's doctor called and said he had little in the way of explanation for what happened to her baby. "Her heart just stopped," Stacy says. "That was it, there was no other explanation. At the time, I didn't know why or what I had done to cause it. But a few months ago, my mom and dad saw a commercial about Paxil birth defects. I was on Paxil early in my pregnancy for a few months, so it makes sense that this could be an explanation for what happened."

The grief that accompanies losing a child never fully disappears. On the one-year anniversary of the fateful ultrasound, Stacy was hospitalized for a week with depression. She has since overcome her depression and had two years of counseling to help her deal with her loss. "Still, not a day goes by that I don't think about her," Stacy says. "That was a really bad time for my whole family."

Posted by
heidi c
on November 12, 2012
i know how you feel i lost my son at 5 months do to my water braking and was told there was nothing that could do i also have a 5 month old who has been born deaf and it is hard to cope with daily stand strong and remember god only give's us what we can handle im a single mother of 3 and i strugeal with life on a daily bass