Mother's Warning to Women: Do Not Take Paxil While Pregnant

Julie Edgington started taking Paxil one month before she became pregnant and stopped taking it by the end of the third month of pregnancy.

"I asked the doctor about Paxil and he said 'Paxil shouldn't be a problem," Edgington says, but she decided to stop taking it after three months. Unfortunately, her unborn baby had already been exposed to Paxil and even three months was long enough for the drug to have a serious effect on him. 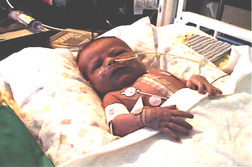 The pregnancy itself was problem-free. "I had no idea there were any complications," Edgington says. Right up until Edgington went into labor the pregnancy seemed fine. However, once Manie was delivered, his problems began right away.

"He started turning blue," Edgington says. "The doctor said he was blue as a smurf." The more Manie cried the more blue he turned and the doctor had no idea what was wrong with him. A specialist was called in but even he did not know what was wrong. So Manie was airlifted to a different hospital.

At the new hospital doctors performed a procedure--known as a balloon atrial septostomy--in which a hole was created in Manie's heart to keep him alive. This kept him alive until he was able to have open-heart surgery for an atrial switch performed when he was eight days old. Manie had been born with transposition of the great arteries.

In addition to his heart problems, Manie developed acid reflux, which caused extensive damage to his throat and teeth. For a few months, Manie was required to take an adult dose of Prevacid to combat his acid reflux.

At only three years old, Manie has endured medical procedures that most people probably could not imagine undergoing. He has had open-heart surgery, balloon atrial septostomy, four cardiac catheterizations, and numerous scopes performed. During one of the catheterizations, doctors discovered collaterals growing off of his heart which caused his hart and lungs to work extra hard. Coils were put in to treat the collaterals, but more coils will be needed.

For right now, Manie is on medication for his high blood pressure, a side effect of the leaky valve in his heart. Edgington says he keeps up with other children with little difficulty, except that he tires easily.

Edgington wants the makers of Paxil to be held accountable for their actions. "This is affecting newborns," Edgington says. "Where's it going to stop? How can they do this to newborns?"

She wants people to know that Manie is a person, not a statistic. "He's gone through more than most people can imagine," Edgington says.

More News
Edgington says that her fight against Paxil is like a mission. "I want to keep this from happening to others," she says. "They keep saying that the risk is small, but the benefits do not outweigh the risks. I just want to tell women not to take Paxil when they're pregnant."

Public Health Advisory
The FDA issued a Public Health Advisory for Paxil on December 8, 2005 based on U.S. and Swedish studies showing that exposure to Paxil in the first trimester of pregnancy may be associated with an increased risk of heart birth defects. Most of the cardiac defects observed in these studies were atrial or ventricular septal defects, conditions in which the wall between the right and left sides of the heart is not completely developed. In general, septal defects are among the most common congenital malformations.