Paxil and Birth Defects Lawsuit: I Just Hope We Can Help Others

"Every time I saw my Ob/Gyn during my pregnancy, I asked if it was safe to be taking Paxil, and every time he said there were absolutely no risks," says Tanya Barnes. But Tanya doesn't blame the doctor -- he was also kept in the dark about Paxil. "Paxil didn't mention anything about possible birth defects."

"There are no heart defects on either side of our family, so we were dumbfounded to find out the results of my 24-week ultrasound. 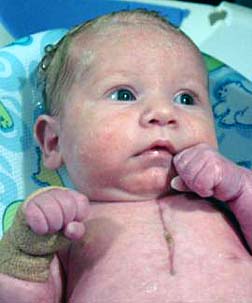 The ultrasound technician scanned his body and then she went over his heart, back and forth. She kept leaving the room and coming back; finally she returned with the doctor and I started crying.

'We all want a perfect baby,' the doctor told us. 'The technician is concerned that something is wrong with his heart so we advise you to see a pediatric cardiologist,' he said. That was Monday and I had an appointment set up for Thursday -- those were the worst three days of our lives. My husband Christopher and I actually hoped for open-heart surgery because the alternative would be to take him home and let him die.

It was a nerve-wracking hour waiting for the results from the cardiologist. He was diagnosed with a congenital heart defect- -- a transposition of the great arteries -- but the good news was that surgery was possible.

When Elijah was born he was a perfect, pink baby. But about one hour later, they took him to NICU and transferred him to Children's Hospital -- to the pediatric cardiac unit. They inserted a balloon in between the heart so his blood continued to oxygenate.

Three days later he had open-heart surgery and was on life support for five hours. When it was over, he looked amazing: He had one chest tube and it wasn't draining a lot of blood -- a good sign. And they were able to close his incision. Thirteen days later we went home.

It was difficult at first. A visiting nurse came every day and did his vitals, checked his incision and dressed his little hands -- Elijah had a bad IV infiltration because all the antibiotics and other meds he was on weren't flushed correctly and it burnt the tops of his hands. For three months we had to put burn bandages on every day. Next setback: a rogue vein was found in his lung so they had to put a coil in this vein.

Everything else was looking okay. For the next nine months we went to the cardiologist every 30 days for heart function tests.

More News
Elijah is now four and I am still concerned. To be honest, Christopher and I still worry every time he runs outside and is blotchy red: is the other shoe going to drop, is it his heart? So we enjoy every day as much as we can with him because five days or maybe five years from now, he may need another surgery. And I am still hoping everything is okay.

Not too long ago, Christopher called me at home. 'You'll never believe what I just heard on the radio,' he said. 'This ad said if your child was born with a heart defect and you were taking Paxil during pregnancy, it may be the cause.' I was shocked, I couldn't believe that something I was told was safe was responsible for all this. I was very angry because it could have been prevented. If only I had known -- I wish I had control over this.

This is what I hope to get from this lawsuit: that it won't happen to others; I just hope we can help other families. I want others to know what we lived through because of Paxil and I want to say this to the drug company: You are messing with people's lives!"