Paxil Birth Defects: "I Wish I Hadn't Taken It"

Kathryn's baby girl was born with a hole in her heart, a defect possibly due to her baby's exposure to the selective serotonin reuptake inhibitor (SSRI) antidepressant Paxil during pregnancy. Now, many years later, Kathryn feels guilty and frustrated because her daughter has many long-term health problems. 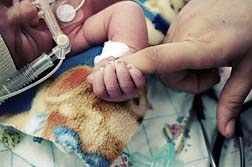 "I was on Paxil during the whole term of my pregnancy," Kathryn said."I asked my doctor if it was safe and she said it was. But now I wish I hadn't taken it. What could I do? I didn't know."

What Kathryn, and possibly hundreds of women like her didn't know, is that SSRI antidepressants can cause serious birth defects, specifically heart malformations such as holes, and something called PPHN (or persistent pulmonary hypertension of the newborn—formerly known as primary pulmonary hypertension of the newborn). PPHN is a potentially fatal birth defect in which the baby's blood flow bypasses the lungs and is therefore very low in oxygen. The condition puts a great deal of stress on the baby's other organs.

Luckily, if it can be considered that, Kathryn's daughter wasn't born with PPHN. However, in addition to a heart malformation the little girl was born with pneumonia. "Our daughter also has developmental delays, a learning disability, depression, chronic constipation and many aches and pains, as well as insomnia," Kathryn said.

Kathryn didn't escape medically unscathed either. "I had severe withdrawals from the drug and I wonder if my daughter's mood swings and learning disability are due to this drug messing up her neurotransmitters while she in was in the womb."

Needless to say, Kathryn worries not only about the long-term ramifications of her daughter's health status, but also about the fact that there appears to be little she can do for her daughter now. "I can't afford the therapies that my daughter needs to be able to function like a normal child," Kathryn said. "I would like justice for my child's pain and suffering."

Paxil Babies – Real or Just Media Hype?
SSRI birth defects have been compared to birth defects and developmental problems in children exposed to other types of drugs during pregnancy. But are the problems real?

According to a study published in the Archives of Pediatric & Adolescent Medicine in 2006, 30 percent of infants who were exposed to antidepressants while in the womb (in utero) experience some withdrawal symptoms. Worse, some 13 percent of those newborns suffer severe withdrawal symptoms, specifically tremors, gastrointestinal problems, respiratory distress, sleep disturbances, and high-pitched crying. A rapid heartbeat, profuse sweating, feeding difficulties, and irritability have also been reported as infant SSRI withdrawal symptoms.

Coincidentally, the Food and Drug Administration (FDA) issued an alert in 2006 on SSRI birth defects which stated, "A recently published case-control study has shown that infants born to mothers who took SSRIs after the 20th week of pregnancy were 6 times more likely to have PPHN than infants born to mothers who did not take antidepressants during pregnancy." The FDA alert also stated, "Neonatal PPHN is associated with significant morbidity and mortality."

More PAXIL BIRTH DEFECTS News
Then, in 2007, a study published in the New England Journal of Medicine showed that the use of antidepressants in the first 3 months of pregnancy more than doubles the risk of craniosynostosis (premature closure of the connections between the bones of the skull before brain growth is complete), omphalocele (the child's abdomen does not close properly allowing intestines and other organs to protrude outside the body), and anencephaly (birth without forebrain).

While these studies by no means represent all the information that's available on this subject, for many women even this comes far too late. For mothers like Kathryn, the guilt associated with having taken an antidepressant during pregnancy and the health problems their children subsequently face can be overwhelming some days. But help is available. If you or someone you love took Paxil or other SSRIs while pregnant, contact a lawyer to discuss your legal options.