The US Consumer Products Safety Commission (CPSC) is investigating various complaints that a new line of Pampers disposable diapers is causing severe, persistent diaper rashes and blisters resembling chemical burns. The makers of Pampers, Procter & Gamble (P&G), dispute the claims and continue to stand behind their product. 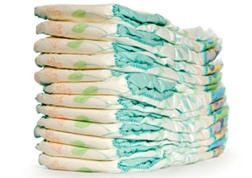 According to an Associated Press report that appeared in the 5/7/10 issue of the Boston Globe, a Facebook page lobbying P&G to reinstate the older version of its product has already gained more than 4000 members.

A mother from Kitchener, a city in Ontario, Canada, says the skin of her infant daughter doesn't lie. "Every time I would go to change her, she would scream," Amber Eby told the Waterloo Chronicle. "Screaming and crying. You could barely even touch her" because the rash was so painful.

"It actually looked like a burn. It was just raw."

Eby, who is expecting her second child, switched from Huggies to Pampers Cruisers after her daughter Ashley started experiencing a mild diaper rash. She found the new Pampers product to be softer and more cloth-like. The hope was that the Pampers product would be less irritating on her daughter's skin.

Instead, Ashley's diaper rash worsened to the point of blistering within a day. Medicated cream provided by her doctor wasn't working.

Eby had been using the new Pampers Cruisers for two weeks when she and her husband heard of the investigation. They immediately switched their infant back to Huggies—and the improvement was dramatic.

P&G responded in a statement that such claims are "completely false" and that it has received fewer than two complaints about diaper rash for every million Pampers diapers sold. "There is no evidence from the people that have called us—or from the research that we have done—that a single baby has experienced a skin safety issue as a result of our Pampers with Dry Max," said the company in a statement.

More DEFECTIVE PRODUCTS News
Bryan McCleary, a spokesperson for the manufacturer, says Procter & Gamble has shared all existing safety data with the CPSC for purposes of their investigation. "We're happy to work with them to clear up any misconceptions or misleading information that might exist," says McCleary.

Eby isn't buying it. She has since returned the diapers she had been using on Ashley, as well as the newborn diapers she bought for her new baby, expected in a few weeks.

"You think you would put something on your kid and it would be safe," she said. "I will never buy any of their products. I'm not going to chance it."

Health Canada has also launched an investigation. The CPSC in the US says it has only received a handful of complaints so far, although CPSC spokesperson Scott Wolfson says the investigation is still in its early stages.

Posted by
Margaret Harrison
on September 17, 2014
For two weeks since using the pampers pull ups on my two year old grand-daughter she has had serious chemical burns on the inside of her thighs. The areas are raw and spreading, we have medicated with every product available, even using neosporin and bandaging. She goes to the Doctor today.