No Overtime, No Business

"We were short-staffed so my boss asked me to work six days a week, ostensibly for a short time," says Andrew Jones. "But it went on for months, then he bought a new Mercedes and vacationed in Costa Rica - at our expense." 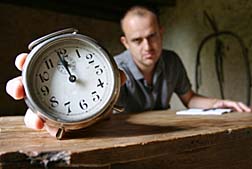 "I was hired in February 2005 as a retail sales person in an imported home furniture store; it was a privately owned company. After two months, the owner told me that he was short-staffed and asked me if I could work a few six-day weeks, just for a short time. He told me that he had a small company and couldn't afford to pay overtime.

I wasn't the only one. We had many general laborers working overtime and English was their second language: it was really disgusting that he required these employees to work overtime without overtime pay - he figured that he could abuse these guys and get away with it because they didn't know any better. They worked anywhere from four to six days a week overtime, usually an extra four hours each day, without getting extra pay. He would use intimidation tactics if they ever questioned overtime rates - they knew what was going on but they also needed the work.

This was just a temporary job for me and I needed it until my application to a new agency in the government was approved - I work in investigations and I was in the middle of transferring agencies. So when he proposed this offer, I said, okay, whatever...it was only going to be a few weekends.

But it went on and on. Every Saturday I worked 9 or 10 hour days. Every time I mentioned overtime pay to him, I wouldn't get an answer. Or I would get his sob story again. I really got taken but when he drove around in his new Mercedes and kept taking these pleasure trips outside the country I found him quite offensive. Did he think we were idiots?

The store I worked in closed because the lease was due and he had another retail store. He tried to make me quit - I would have qualified for unemployment insurance and his premiums would have gone up if I collected. Being an investigator, I knew how it worked. I asked him that, if he didn't stop trying to make me quit, I would pursue all monies owed me since my employment there.

No reply, no acknowledgement on his part.

More News
I finally saw an attorney because I calculated that I had about 200 hours of overtime and lunch breaks that I wasn't paid. I have everything fully documented; some days I even worked 13 hours. I am also pursuing this with the labor commission. I filed a claim with them for $6,000. Once my ex-boss comes to the hearing, if he shows up, I will subpoena his payroll records. The hearing isn't set but the whole process should take about six or seven months.

The state of California states that, if there is any violation of the labor code when an employee seeks representation by the attorney, the attorney's fees have to be paid by the employer. I kept all my pay stubs that show I didn't get breaks; every lunch time I worked is documented. He is going to regret not paying my overtime.

Ideally, I hope this will happen: by filing with the state of California, their field unit will open an investigation on this guy and all the laborers will also get their overtime pay. If you can't afford to uphold the law and be in business, you shouldn't be in business.