Time and again there's another company not paying time-and-a half for overtime hours worked. Nancy Munoz worked almost a year in retail until she couldn't take any more 60-hour work weeks.

"I started with this retail company last October," says Munoz. "I was hired as a senior assistant manager and it was to be a salaried position, 40-42 hours per week. No more than that. I ended up working 50-60 hours, six days a week and usually every holiday. It was really bad—sometimes we (the other assistant manager) didn't get a lunch break until about six hours into our work day; we didn't even know what a break was. 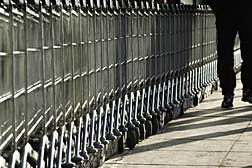 The rest of the staff was on an hourly rate and they were paid overtime. I found out that, including their overtime, my associates were getting paid more than me.

I finally complained to HR in April. I feel like I should have been paid as an hourly assistant because of the way I was treated and the work I performed. For example, my boss never included me in any management decisions; she never communicated with me about daily operations. It took more than four months to receive my keys so I could open the door- there was no trust whatsoever. And I had been a general manager for Casual Corner--a retail outlet--for 11 years before they closed so I have a perfect track record; plus I have so many managerial awards from my previous position.

I was a good manager, but this woman never allowed me to perform my management skills. Instead I was relegated to stocking shelves. I spent most of the time in customer service or on the floor, selling.

The last straw was when I had a domestic emergency—I had to take my dad to the hospital. I asked her for the next day off and she refused. She said I had to be in the store on Sunday until 5.30 p.m. But the department manager was also scheduled that day. That was a lie because the week before, she left the department manager in the store all day and came in to cover his lunch. But she wouldn't cover my lunch—ever. And 'break' wasn't even in her vocabulary where I was concerned. 'We're salaried, this is what we need to do,' she said when I asked her about getting a break.

More News
Last Saturday I just couldn't take it anymore. The schedules were never ready—she put herself on the schedule but never showed up; we never knew who was going to show up and this last-minute scheduling led to having more overtime work. She told me that I had to inform her when I was going to the washroom and I had to take my cell phone with me. Going to the washroom was the only time I could get a break. I wrote a letter of resignation and handed it to her—dated July 20th.

I calculate that she owes me 400 hours of overtime. Now I have some free time instead of working 12-plus hours a day, I can get my documentation together, (we clocked in and out so I can get payroll records from HR) and take it to the labor board. I want to do this not only for me, but my co-worker; she is still there and is so intimidated that she is too afraid to complain.