As the mean population of the nation continues to age and baby boomers begin to live out their retirement years, an increased focus is placed on nursing and extended care facilities for the elderly, the residents they serve and the caregivers who work there. To that end, an unpaid overtime lawsuit was filed this week in California alleging that workers have been denied breaks and overtime pay, in violation of overtime pay laws and other statutes. 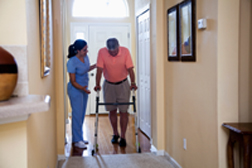 The defendant in the overtime laws action - Kindred Healthcare, and subsidiaries Professional Healthcare at Home and NP Plus - is headquartered in Kentucky. However, the lawsuit was filed in Oakland and brought by California plaintiffs unhappy with working long hours without the capacity to take proper breaks for rest and nutrition, or so it is alleged.

The plaintiffs also allege in their lawsuit that the reality of missing such breaks puts them into an overtime pay situation that has not resulted in compensation.

According to the Contra Costa Times (6/18/14), lead plaintiffs in the unpaid overtime lawsuit currently seeking certification as a class action are both from California and both veteran caregivers. Emma Delores Hawkins hails from San Pablo, while Ginger Rogers calls Sacramento home. Both women, according to the report, provide non-medical care to the elderly, ill and disabled on behalf of Kindred.

Kindred contracts out workers like Hawkins and Rogers to assisted living and rehabilitation facilities. Plaintiffs allege that during 12-hour shifts five to seven days per week, meal and rest breaks that are mandated according to California Labor Code and the Fair Labor Standards Act, are not provided.

“You might get a chance to go to the bathroom, but getting fresh air or taking a break - it’s not happening. Not a lunch break, not a 15-minute break, nothing,” Rogers said, in comments appearing in the Contra Costa Times. “It’s been going on for quite some time. Unfortunately, a lot of people have not been speaking up. I decided to speak up. I’m going for some change in the health care profession.”

While the lead plaintiffs indicate they themselves usually work for 12 hours within a shift, the lawsuit alleges that some workers can toil up to 24 hours without being granted or having the opportunity to take needed meal and rest breaks as required by law. The lawsuit notes that workers deployed to private residences receive a flat-pay wage that breaks down to less than minimum wage, when missed breaks and such are factored in.

According to the report, the lawsuit would affect about 300 caregivers who work on behalf of the defendants in private homes and elder care facilities throughout the state.

More CALIFORNIA OVERTIME News
However, legal advisers to the plaintiffs allow that the unpaid overtime and missed breaks lawsuit could have implications for an estimated 3.5 million caregivers who work under contract on behalf of various entities across the US.

A spokesperson for the defendant had no comment, noting that the overtime pay lawsuit - filed June 18 - had yet to be served.

Many employers who hire workers under contract attempt to escape overtime pay laws that govern provisions for minimum wage, overtime pay, and mandated meal and rest periods, by claiming contracted workers are independent contractors, and not employees. Numerous lawsuits have been filed by plaintiffs who take exception to such a position.

Not making allowances for meal and rest periods as mandated under California labor law can, across a 12- or 24-hour shift, contribute to health problems and poor job performance for the worker, together with safety concerns for the clients they serve.