Strippers and Health Care Workers had something in common last month: they both filed California overtime lawsuits - just in time for International Workers’ Day. 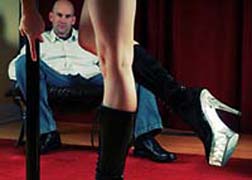 Prime Healthcare Paradise Valley has been sued for allegedly failing to pay their hourly employees the proper overtime pay and allegedly failing to allow these employees to take adequate meal and rest breaks. And San Jose’s Pink Poodle was slapped with a lawsuit for unfair labor practices by 11 former Pink Poodle pole dancers who allege they were not paid minimum wage or overtime, and often had to pay the club to dance there.

The Poodle legal action is also attempting to change the status of exotic dancers from independent contractors to employees. If they can be classified as employees, the dancers would be eligible for Social Security, health care insurance and many other benefits that hourly workers employed by a company are entitled to. The dancers have a combined 57 years of sashaying down the runway and sliding down the Poodle’s poles, which works out to about five years each. (According to the US Bureau of Labor, the average wage and salary worker in 2012 stayed with their employer for less than five years.)

As for the unfair labor practices, the club’s owners allegedly do not pay certain dancers any wages and “threaten retaliation” against any dancers who complained, according to the lawsuit.

The women’s labor law attorney, Gregory Douglas, said the strippers didn’t even know they were being exploited - some reported making up to half a million dollars a year in tips. Douglas told the Legal Monitor this is very common, particularly in strip clubs where “some very big, sophisticated companies have violations of the California Labor Code.” He added that at least two similar lawsuits have been filed by exotic dancers nationwide in an attempt to re-classify them as employees with benefits.

Both those suits favored the dancers. A New York Federal court in 2012 ordered the owner of an adult nightclub to pay back wages to 1,900 dancers who had worked there over a three-year period. And dancers who filed suit against Spearmint Rhino, a men’s club chain, won a $13 million settlement for wages and overtime.

More CALIFORNIA OVERTIME News
Back to the health workers: The proposed class action (Ortega, et al. vs. Prime Healthcare Paradise Valley, LLC, Case No. 37-2014-00011240) filed by Paradise Valley hospital employees alleges that Prime Healthcare fails to take into account differential wages for working weekend and night shifts in the regular rate of pay when calculating overtime pay. The error has resulted in a “systematic underpayment of overtime compensation” to the employees, according to the complaint. Further, the complaint also accuses Prime Healthcare of not properly paying overtime to its employees for the past four years and did not provide workers complete meal and rest breaks, which is a violation of the California Labor Code Section 226.7 and 512.

Prime Healthcare, which is headquartered in Ontario, California, has more than 30,000 employees, according to its website.