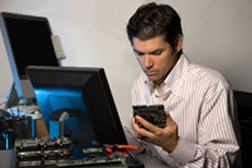 The lawsuit, case number 4:12-cv-03516-SBA, was filed in California against Agilysys, a software company. It alleged that employees called “Installation Specialists,” employees who installed Agilysys software and hardware for clients, were denied overtime pay and premium wages in violation of the Fair Labor Standards Act, and in violation of California wage and hour laws and employment laws in other states.

According to court documents, installation specialists had virtually identical jobs regardless of the region, district or facility they worked in. They were regularly expected to work overtime and often prohibited from taking their 30-minute meal breaks. The lawsuit alleges Agilysys “unlawfully and willfully” misclassified the plaintiffs and the members of the class as exempt from overtime pay, “despite the fact that they were not exempt.”

The lead plaintiffs alleged they frequently worked more than 12 hours in a day and more than seven consecutive days without receiving overtime pay. The plaintiffs argued they are not exempt from overtime pay because they had “substantially similar job requirements and pay provisions.”

More CALIFORNIA OVERTIME News
According to Law360 (10/21/13), the two sides had reached a $1.5 million settlement in June, but that settlement involved an opt-in class for claims involving the Fair Labor Standards Act and an opt-out class for claims made regarding California wage and hour laws. US District Judge Saundra Brown found that the California class was too small to be certified and rejected the settlement. There were only 14 installation specialists involved in the California claim, according to the judge’s decision on the original proposed settlement.

“Given the small number of individuals for whom class certification is being sought, the Court finds that Plaintiffs’ request to certify a California Class must be rejected due to their failure to satisfy the numerosity requirement,” the judge wrote. Because the California class was not approved, the settlement as a whole was rejected.

The new settlement drops the California-only class and instead includes only the class involved in the Fair Labor Standards Act claims. Included in the settlement are 127 current and former installation specialists. The proposed settlement has not yet been approved by the judge.
READ ABOUT CALIFORNIA OVERTIME LAWSUITS